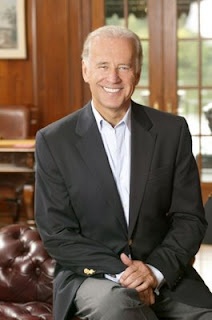 The cable networks did manage to beat the Obama Text Message by about three hours, but the result was the same regardless. Senator Joe Biden of Delaware is Barack Obama's choice for Vice President.

I think it was a good, although rather predictable choice. It turns out Hillary Clinton was never considered. That Obama didn't add her to his short list and make it clear she was actively considered, is a silly and shortsighted omission. It will
cost Obama a few votes. It should. It shows very poor judgement on Obama's part.

If the Republicans had an exceptionally strong woman to add to the McCain ticket, it could be a bigger issue. McCain could really steal votes IF he had an option that made sense.

Since Obama went safe and didn't rock the boat, I expect McCain to do the same. The conventional wisdom at this moment is Governor Tim Pawlenty. Don't expect the Wizard to be pleased.

Perhaps a lot more significant than the Vice Presidential choice is that Progressives and the very far left wing of the Democrat Party ARE GETTING THEIR FONDEST WISH: Barack Obama is turning extremely negative and will run a "Burn McCain in Hell" convention next week.

I'm frankly sure Senator Biden is actually very unhappy with this. He recited his lines on cue yesterday and he is a good soldier. But this unwarranted and totally unnecessary demonization of McCain is simply tragic. Plus Biden and McCain are friends. A classic example of McCain's and Biden's abilities to work across party lines.

I've read several blog entries from both sides of the aisle today that literally make me want to cry.

But, all you McCain supporters, don't worry. I'm told there is a video tape proving Obama actually sold the gun to Jack Ruby that was used to assassinate Oswald. The circle remains unbroken.

An excellent essay, Wizard, in vintage FKAP style: edgy and provocative. As a non-member of your amen choir, I feel mandated to pick up some loose ends.

As one who is afflicted with a severe case Bush Derangement Syndrome (BDS), I need to reiterate something I've told you before. For one thing my case is incurable except through surgery (impeachment), for which Bush inexplicably failed to qualify. Secondly, my case is not terminal, in that I don't expect to die from it, although I'm leery of complications (excessive drinking, inadequate exercise). I am resolved that I will live with BDS as long as Bush remains unconfined in the Hague. Finally, I don't know exactly why I feel this way, but I'm definitely sure that BDS will not be replaced by "McCDS", or mutate as a spore in that direction.

On Joe Biden: Progressives would have been served by the selection of Wes Clark; Liberals are served best by Joe Biden. Since General Clark has been banned from speaking at the DNC, I'm not looking for much-deserved hell-fire to be ignited there this week. Were it otherwise. McCain would much deserve to be more than singed, close as he has drawn to the Bushencheney micro-organism. Consider it a part of the disinfecting and sanitizing process.

A final note: I was not at all amused about your ending detour to Dallas in 1963. There, there is nothing to amuse anyone. I did not feel it belonged in your otherwise excellent piece.

Wizard, I can only state that I've agreed with Vig 100% when it came to Clark as VP. However, I've always liked Biden. So, overall, I'm not annoyed. I'm not disappointed about either Clinton and Edwards—I knew their views in July 2007.

Of course, this put a pall on Clinton and Edwards. They were a disappointment to me. I think Barbara Boxer would be a better choice for VP or, better yet, President. I credit Clinton that she's already working to diffuse the Pumas and try to persuade them to support Obama. I think that will make a huge difference in winning the presidency.

Wizard, both Obama and Biden, as winners, will be in hell trying to dig out the mess created during the last eight years. And, yes, a well-written provocative article.

I, too, was sorry to hear that Obama's campaign spokesperson said that Hillary had never been vetted, nor considered as a possible running mate.

However, I can understand how such an apparently honest remark could have been said by someone working in Obama's campaign, given Hillary's grandiose narcissism, and her selfish demands to inhabit the Convention's Center Stage, at what should be a celebration of Obama, not of Hillary.

Hillary's all consuming sense of entitlement and her blind pursuit of personal ambition, which again threatens to disrupt and divide the Democrats, effectively handing the election to her buddy, McCain, deeply saddens and angers me.

I disagree with your characteriza tion of the Obama campaign as having joined McCain in the slough of electioneering slime that McCain inhabits.

Au contraire, I feel that Obama leans over backwards to use only McCain's actual words to illustrate the differences between them.

Obama (and Biden) speak of their respect for McCain's years of military service.

Obama has never once mentioned that McCain crashed five planes, one of which was never fired upon, wasting our precious tax dollars with his grandstanding. Obama has not spoken of McCain's infamous womanizing, nor called him on his sexist "jokes". He does not speak about McCain in "code". Obama does not put out campaign literature, videos, or ads in which he lies about McCain, as McCain persissts in doing in his muckraking ads attacking Obama.

"Wiz", I do not know what led you to lump Obama in with that hypocrite and liar John McCain, who "approves" such negative ads.