Every Liberal SHOULD Oppose The Health Care Restructuring Bill 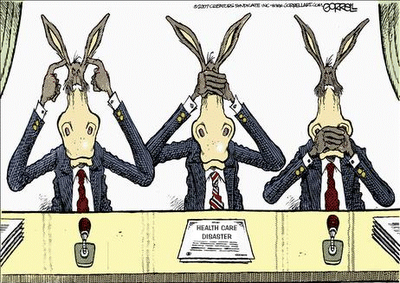 It is simply stunning to me that a single Democrat would vote for the convoluted, wasteful, bloated, complex and pork laden Health Care Restructuring Bill that is now in the early stages of reconciliation.

It is stunning to me that a President as bright and seemingly idealistic as President Obama would ever consider signing it.

This bill is a hopeless mess of bureaucracy that institutionalizes into law Sarah Palin's notorious death panels, fails to live up to President Obama's promise of being able to keep your current insurance, raises taxes through the roof and insures drastically higher insurance costs.

Worst, it will destroy the one part of Medicare that works so exceedingly well, the Advantage Program, that is a lifeline to many senior citizens.

It is literally a damned mess.

If we, as liberals, have any principles left, we cannot endorse a program that pays off the drug companies, actually prohibits or completely eliminates competition, rewards the insurance companies, taxes current health care programs, hides new taxes under every rock (most of which will hit low wage earners hardest), and fails to cover many Americans.

I am reminded of all this as I watch Senator Ben Nelson fight for his political life. Things are so bad in Nebraska that Nelson is going to be forced to air a political ad during the Nebraska-Arizona Holiday Bowl Game and, literally, beg his constituents for forgiveness.

I'm sorry to be the one to tell you Senator, but it ain't gonna work. When you sell out your principles for this load of crap, you will be punished by the voters who used to look up to you and used to respect you.

Nelson is just the first. You cannot vote for a bill so horrifically bad that every voter on earth knows is a failure and not pay the ultimate price.
Posted by Bob Keller at 12/30/2009 12:41:00 PM 10 comments:

With the last holdout, Senator Ben Nelson, Democrat of Nebraska, announcing he will finally support the massive Health Care Restructuring Bill now before the Senate, nothing stands in the way of this bill passing.

The American public have made it increasingly clear for many months they want nothing to do with the tax grab and benefits cutting monstrosity. But, under massive pressure from President Obama and his staff, Democrats have caved and are willing to defy the public wishes and pass the bill that could have and should have been the crown jewel of the Obama Presidency.

However, after months of buying off Senator after Senator, the bill is no longer a jewel, but just a pork filled bag of bacon larded up for the drug industry, the insurance industry and, rather curiously, the A.A.R.P., whose Medicare supplement insurance program (run by insurance industry giant, United Health Care) stands to make millions off Medicare cuts.

Certainly the worst feature of this bill is the disastrous cuts in Medicare which will result in denied benefits through the establishment of a health care panel to provide guidelines to Doctors on approved treatments Medicare will cover. This absolutely is Sarah Palin's famous "Death Panel." It will become a reality.

While Republicans make every effort to delay the passage of this bill, they have done a poor job of making every American aware of the massive tax increases we will face once the bill passes. Five Hundred Billion Dollars in tax increases will touch every American, even those who will supposedly receive aid in purchasing insurance.

Unions hard won insurance policies will be devastated by the proposed taxes on "Cadillac Plans" which are, in fact, not owned by the wealthy, but mostly by union workers won through years of hard negotiations. Benefits in these plans will be stripped.

But the fix is in, the backroom deals are done. Harry Reed will push the whale through the keyhole on Christmas Eve. Nothing can stop this from happening, except.......

Well, except the people. If all the Tea Party people, a disorganized lot if there ever was one, can somehow break out of their Christmas routine and mount a massive campaign to call their Senators, especially the Democrat Senators, they might just derail this process.

Michelle Malkin is alerting her readers:

Now, make sure to take time out of your busy Saturday before Christmas and burn up the Capitol switchboard (202-224-3121) with a clarion message for your Senators:

Say it louder and often. Spread the word. Sound the alarm. They are pretending not to hear you yet.

Throughout history the conflicts between religion and the scientific community have been explosive, emotional, violent and, occasionally, deadly.

When we think of science versus religion we often think of Galileo Galilei, whose on-going battle with the Catholic Church resulted in his imprisonment and, ultimately, in his death in 1642. 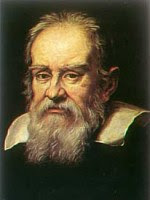 While teaching his theories, Galileo gained a following of students that recognized his genius. In 1616 however, he came into disfavor with the church. Galileo, as a man of science, expressed his support of the Copernican theories that stated the earth and other celestial bodies rotated around the sun.

Unfortunately his teaching directly contradicted the teachings of the church and he was summoned to Rome and reprimanded for his "heresy". In 1633 he was sentenced to life in confinement. Even though his health was declining and became completely blind by 1638, he continued developing his theories and communicated, often in secret with his followers.

Over 300 years after his death, a statement by the Pope before the Pontifical Academy of Sciences in 1992 is interpreted as the official rehabilitation of Galileo by the Catholic Church.

Any time an idea or philosophy becomes a religion it tends to lose all flexibility. True believers defend the orthodoxy at all costs and make every effort to silence, or even imprison or kill opponents.

Ultimately, it tends to all be about power. The church in Galileo's time had enormous power and wealth. It felt terribly threatened by Galileo's ideas. If people no longer believed the earth was the center of the universe, they might not continue to support the church with tithes, taxes and lavish gifts.

Today we have a rather strange twist on the old science versus religion battle. But, in this case, the "religion" is the orthodoxy of "global warming" or, as it is now more properly called, "climate change." The great religious leaders of climate change are still hounding, censuring and trying to silence the scientists who dare to question the established religion.

And, just as in the time of Galileo, it is still about money and power. There is the opportunity for great power and immense wealth in climate control. One Prophet of the new religion, former Vice President Al Gore, has already made millions of dollars, won a Nobel Prize and is poised to make billions. But the issue certainly isn't Al Gore. Governments and corporates stand to gain immense profits and power from the enforcement of climate control regulations.

For some time a rapidly growing number of scientists have realized that climate change models just don't work. We've had global cooling for eleven straight years and it now appears this cycle of cooling will continue for at least twenty more years. In addition, some models point to entirely different, and occasionally more dangerous scenarios going forward. And the solutions being proposed by the established global warming religion might make matters a whole lot worse.

The very unscientific efforts to hide conflicting facts, destroy historical data and marginalize those who dared to question global warming all came to light when a huge series of emails were hacked and then released to the public. And, as is often the case, the cover-up quickly became worse than the original crimes.

The more the established global warming community attempted to explain the email, the obvious it became that the cover-up was long running and unacceptably extensive. The most recent "disclosure" that historical data was destroyed to "save space" is so laughable that all remaining integrity of the climate change community has been lost.

Science will ultimately prevail, as it always does. Those who forecast global may ultimately be proved correct. Or, it may be determined that the global warming heretic's ideas were censured or imprisoned under false pretenses.

But certainly the warnings about the dangers of turning scientific research into a political or religious cult should be learned and heeded.

Excellent articles that should all be read:

Financial Times: Secrecy in science is a corrosive force By Michael Schrage

The Telegraph UK: Climate change: this is the worst scientific scandal of our generation

US News and World Report: Penn State Will Investigate 'Climategate'

Finally, a real and genuine tip o' the Wizard's Pointy Cap to Lee over at Lee's Tid Bits who has been at the leading edge of this controversy for over a year. Like the scientists who dared to question the global warming orthodoxy, Lee has been subject to great harassment and persecution. Lee has constantly held his own. His blog is a must read in my book (for this and for many other reasons, including that he is just a great guy).