Law abiding citizens do all of those things and more.  Most go out of their way to obey both the letter and the intent of the law. They're good citizens, dependable and honest.

Government agencies who are charged with enforcing the laws have one hell of a tough time with criminals.  Law enforcement is dangerous work when it comes to criminals.  They are hard to find, harder to catch and it's dangerous to try.  Often it is life threatening work.

Getting law abiding citizens to comply is easy, simple and safe.  They follow willingly.

Laws that regulate activities of the law abiding citizens get excellent results, even if they accomplish no real good for society.  That's why we're seeing so many mayors in troubled cities like Chicago, Los Angeles and New York turn their efforts away from criminals and instead focus their limited budgets toward passing and enforcing laws aimed solely at law abiding citizens. 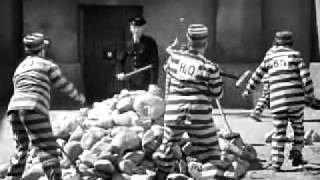 Drug dealers, thieves and even murderers can breathe easier in New York beginning March 12th as the city, under the brilliant leadership of Ivory Tower Occupant and City Mayor Michael Bloomberg, focuses the attention of the entire city on eliminating soft drinks over 16 ounces from NY City streets.

The Mayor's massive bureaucracy has rolled out the details of the new regulations on sugary drinks to all the cities law abiding citizens and they are truly bizarre, indeed.

I'm not sure what frightens me more, the Mayor's regulations or the city's citizens who will willingly follow Bloomberg's yellow brick road all the way to Orwell's Animal Farm.


Take a big gulp, New York: Hizzoner is about to give you a pop.

Nanny Bloomberg unleashes his ban on large sodas on March 12 — and there are some nasty surprises lurking for hardworking families.
Say goodbye to that 2-liter bottle of Coke with your pizza delivery, pitchers of soft drinks at your kid’s birthday party and some bottle-service mixers at your favorite nightclub.

And consumers, especially families, will soon see how the rules will affect their wallets — forcing them to pay higher unit prices for smaller bottles.

Typically, a pizzeria charges $3 for a 2-liter bottle of Coke. But under the ban, customers would have to buy six 12-ounce cans at a total cost of $7.50 to get an equivalent amount of soda.

Domino’s on First Avenue and 74th Street on the Upper East Side is doing away with its most popular drink sizes: the 20-ounce and 2-liter bottles.

It will also trash more plastic into the environment.

Deliveryman Philippe Daniba said he had brought countless 2-liter bottles of soda to customers over his 19 years at the restaurant. The ban, he said, “doesn’t make sense.”

Notice in the above excerpts how every one of the city's law abiding citizens are doing their level best to comply even as they protest the silliness of the regulations.

How about a boycott of New York? Perhaps not as much to protest the Mayor's actions as to protest the citizens willingness to go along with this absurdity.

POST SCRIPT: Doug Powers wryly observes, "Bloomberg is still going to allow pizzas to be delivered?  Unbelievable. It seems like the obesity from the pizza combined with the global warming from the delivery vehicle would be enough to convince The Nanny to put a stop to it. Maybe that’s next."
Posted by Bob Keller at 2/24/2013 05:05:00 PM 4 comments:

Today President Obama will visit Chicago, ground zero of America's Genocide. Thousands of young black Americans will be murdered this year, many right in the heart of Chicago.

But President Obama will actually ignore the genocide, he will never mention it or the factors behind it. He will offer no solutions, advice or even moral guidance. He will actually pretend the genocide isn't happening. Instead he will go to Chicago to recommend that we make guns that are already illegal in Chicago... illegal.

He will "probably" blame Republicans and the NRA for fighting his efforts to reduce gun violence by making law abiding citizens go through additional steps in purchasing and owning guns. While I have no objections to the President's proposals, they will accomplish NOTHING.

The people Obama wants to further regulate, register and restrict commit no crimes. The are not even remotely part of America's Genocide.  His proposed laws will actually penalize the moist honest and most loyal and most law abiding people in the entire nation.

So what will the laws President Obama propose accomplish? Well, they will allow Doctor Obama to tell folks he is trying to do something. He's offering a prescription to reduce gun violence.

If only it were true.

Doctor Obama ought to be sued for malpractice. He is lying to the patient about the diagnosis. He is not offering the prescription that could potentially save thousands of lives. He should not be practicing medicine ... or governing. 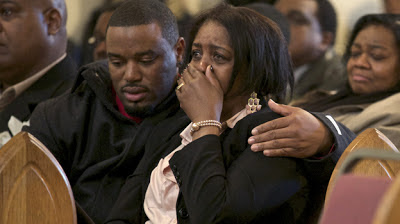 Shirley Chambers had four wonderful children.  Like all mothers she had hopes and dreams for every one of them.  Today all four are dead, victims of America's Genocide, the epidemic we lack the honesty or courage to address.

Shirley's oldest boy, Carlos, was shot by a classmate when he was only 18 years old.  The tragedy was almost too much to bear.

Shirley lived in the infamous Cabrini-Green welfare housing development, which thankfully has been torn down.  But not before gang violence in the apartment complex claimed the life of Shirley's daughter, LaToya.  LaToya was caught in the cross fire of gang warfare right in the Cabrini-Green lobby.

Shirley Chambers begged and pleaded for her only remaining child, Ronnie, to abandon the gang lifestyle and chose a different path in life.  Ronnie, who was known by his nickname "Scoobie" did just that and turned into a mentor, helping other young men leave the gangs and explore other pathways, including music.  He became a notable rap performer and recently appeared on Ricki Lake's Chicago television show.

He told Ricki that the murders of his two brothers and sister made him change his life.

"That right there, you know, me in and out of jail, let me know I had to do something different," Chambers said.

Just one month later Scoobie was dead, shot in the head as he sat in a parked car.

Shirley Chambers has lost all four children to gun violence.  None were killed with so-called "assault weapons."   None of the murders would be prevented by the gun control legislation President Obama has proposed.

And, in spite of Rev. Jesse Jackson's pleas yesterday, President Obama has no plans to visit Chicago or to propose any solutions to reduce the real gun violence destroying America.
Posted by Bob Keller at 2/05/2013 12:53:00 PM No comments:

(Reuters) - Civil rights leader Jesse Jackson and relatives of victims of fatal shootings in Chicago urged President Barack Obama on Saturday to come back to his hometown and address the gun violence plaguing the city.
Before a march on the city's South Side, Jackson, a former Democratic presidential candidate, said America's third most populous city needed more help than Mayor Rahm Emanuel and police superintendent Garry McCarthy could offer.


"When the president shows up, it shows ultimate national seriousness," said Jackson, a Chicago resident. He also called for the U.S. Department of Homeland Security to help patrol the streets of Chicago.


Gun violence in Chicago has been in the national spotlight over the past year, with 506 murders in 2012, an increase of 17 percent from the previous year. As of Thursday, there were 42 homicides and 157 shootings so far this year, according to Chicago police.


The issue received new urgency with the killing this week of 15-year-old Hadiya Pendleton, an honors student who performed with her high school band at Obama's inauguration on January 21.
Posted by Bob Keller at 2/04/2013 01:33:00 PM No comments: 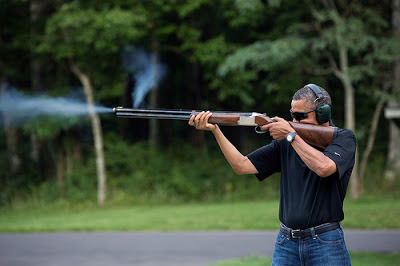 The entirely too painful to watch gun control debate continues in Washington, D.C. and on a cable television news channel near you.  I am beginning to fear that virtually nothing will actually come of any of this.

There are three reasons for this.  First, in spite of the histrionics from Democratic Party stalwarts, there simply is no national will to make this happen.  There is no groundswell of support for gun control as outlined by the President.

Second, the N.R.A. has again proven to be well organized, logical in their arguments and powerful in their lobbying.  It really, really helps them that they are technically correct and often morally correct in many arguments they make.

Lastly, gun control will fail because our leaders, from President Obama on down, lack the courage to address the real issues of violence in our country.

Let's analyze the facts. There are about 30,000 gun deaths in our country every year.  But the facts are that 2/3rds of them are self inflicted gunshots, usually suicides, not gun violence or murder.

Of the remaining 1/3rd the largest chunk comes from gang violence, drug violence and domestic violence.  Virtually all of these deaths are caused by handguns and simple rifles, not so called "assault weapons."

Although Newtown, Connecticut and Aurora, Colorado get all the television coverage and politician's outrage, they account for only 0.003% of the total.  That's not three percent, but three one-thousandths of one percent.  And yet President Obama and the gun control advocates are attempting to push their ill conceived legislation to reduce this tiny percentage of the problem. They ignore the real problems of gun violence and death because it's politically inconvenient.  It would take genuine courage.

No one wants a Sandy Hook to ever happen again, Not Ever.  But the solution to that event is already thoroughly outlined, understood and being implemented.  Wayne LaPierre and the N.R.A. had that one right on day one and everybody knew it.

The tragedy is that no one has the courage to address the really big problem of black on black gang violence.  Our very own national genocide continues every day in Chicago, Washington, D.C., Los Angeles and nearly every major metropolitan area in America: Death... after Death... after unreported and ignored Death.

The most unlikely of activists, economist and conservative firebrand Ben Stein, addressed this lack of leadership in this week's American Spectator in his article   He’s the Biggest Celebrity in the World Below are some of Ben's key points. Please read his entire article.

In any given week, on any given weekend, dozens of black youths are gunned down by other blacks in America’s cities. This is a horror show happening in real life. The total number of deaths from this ongoing disaster far outpaces the deaths in mass killings in Aurora or Newtown.

Now, in no way should either of these grim phenomena be used to minimize the other. But it amazes me that the whole country, the whole world, goes berserk about the killings in a charming town in Connecticut, as we should — while the daily slaughter of black youths by other black youths is just part of the wallpaper of modern life.

Obviously, we would like to stop as much gun homicide in any area as we can. But I have not seen any proposal from the White House that would make it a national priority to seriously crack down on gang activity, drug sales turf activity, just plain macho g-thing activity and to take the Glocks out of the inner city.

Guns don’t kill people. People kill people. And we pay very little attention to it when the people on both ends of the barrel are black. The national shame of gun violence is not coming from gun shows or guns that look like military weapons. It’s not coming from Idaho or Montana or Wyoming or the duck blinds of Talbot County, Maryland. It’s coming from people who live in a culture of violence and death that we as a nation sometimes worship and more often ignore. Something’s very wrong here.