If You Already Know ALL the Answers...

If you already know all the answers, there is really no point in asking any questions.

And there is one thing we know for certain, Michael Hastings, writing for Rolling Stone Magazine, already knows all the answers. And if you don't believe me, just ask him. He'll quickly set you straight.

It's really just a damned shame that Mr Hastings isn't President of the United States of America. He knows exactly what needs to happen in Afghanistan. He knows what the military needs to do and what our strategy ought to be. 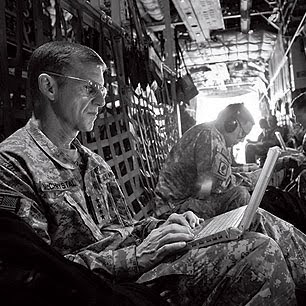 But Michael Hastings isn't President. So he used his many talents and his position at Rolling Stone Magazine to skillfully
write a hatchet piece to bring down General Stanley McChrystal, the Commander of the allied forces in Afghanistan. It was a tough and dirty job, but Michael Hastings was up to the task. And today Hastings is the victor and a brilliant General is gone.

Hastings knows all too well his job isn't done. In his follow-up article today he makes it clear that McChrystal's successor, General David Petraeus won't fall as easily as McCrystal did. But Hastings also makes it clear in his ego driven Rolling Stone follow-up, that he is up to the job and his work won't be finished until his personal vision for Afghanistan is in place.

Hastings writes today, "Changing generals isn't likely to resolve the real trouble in Afghanistan: the fundamental flaws in the U.S. strategy of counterinsurgency."

Now we all know that it was General McChrystal's own off the cuff, unwise and sarcastic comments actually caused his demise. Michael Hastings was just the all too willing messenger. Hastings just asked all the questions. And he complied the answers he wanted.

Frankly I believe Hastings knew the most important answer before he started his interviews. That answer is the subtitle of his Rolling Stone essay:

Stanley McChrystal, Obama's top commander in Afghanistan, has seized control of the war by never taking his eye off the real enemy: The wimps in the White House

I'm willing to wager any amount of money Hastings knew his article would manipulate those "wimps in the White House" to fire McChrystal.

I genuinely believe President Obama had to accept General McChrystal's resignation. And Obama did the right thing in promoting Petraeus.

But it is Michael Hastings that knows all the answers. It's a shame we can't make him a general.

This video has gone viral so I'm betting you've already seen it somewhere else. Still it's funnier than having to discuss the real events and issues. So here goes:
Someone mentioned the only thing curiously missing from the video is the government.
Errr..... No. What you see here is pretty much correct. The Federal Government has been essentially missing in action on this one, as anyone actually down here on the coast can tell you. And the absence of any intelligent Federal response has allowed Louisiana Governor Bobby Jindal to become a folk hero.
It is tragic that this event has developed in slow motion. Even today President Obama and the folks in Washington do not understand the magnitude of the destruction that has taken place, both to the environment and to the gulf coast economy.
Posted by Bob Keller at 6/12/2010 10:42:00 AM 2 comments: