Why I HATE Political Parties and Partisan Bull 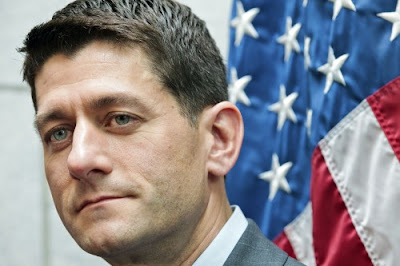 I've always been a big, big supporter and fan of Republican Representative Paul Ryan. Even though I'm a Democrat I cheered when Ryan was selected as Mitt Romney's running mate in the last election.  He is one of Washington's finest. He is certainly one of their brightest. He's honest and even handed, logical and fair, pragmatic yet principled.

Here's a great example from today's news.  Ryan is working hard, against his own political party, to help Immigration Reform happen.  From the Boston Globe:

Ryan, the House Budget Committee chairman who is frequently mentioned in the GOP lineup of possible 2016 presidential candidates, stands apart from many fellow House Republicans in favoring a way out of the shadows for the 11 million immigrants living in the U.S. in violation of the law. He casts sweeping overhaul as a necessity to ensure both economic and national security — a fitting argument for an acolyte of Jack Kemp, the late Republican congressman and 1996 vice presidential candidate who backed an ill-fated effort in 2006 to overhaul the immigration system.

‘‘Paul Ryan says we cannot have a permanent underclass of Americans, that there needs to be a pathway to citizenship,’’ says Rep. Luis Gutierrez, D-Ill., who has been working relentlessly on immigration legislation. ‘‘He is my guiding light. I know I get him in trouble every time I say it.’’

Ryan is being himself.  He hasn't changed and he doesn't change to suit the political party line.  He is a man of principle and substance.

Here's why I hate Political Party's and the mindless partisan hacks who simply echo the party line without a single intelligent thought of their own.  Many of my fellow Democrats and especially the so-called "Progressives" who now praise Rep. Ryan were lambasting him as the worst human being alive (or dead) during the last election.  He was called every name in the book and accused of hating old people, women and minorities.  None of that was true.  None of that was necessary.  And any reasonable person with moderate intelligence knew it.
Posted by Bob Keller at 7/18/2013 01:22:00 PM No comments:

Justice for Sterling..... Sterling Sims was just five years old when he was gunned down along with  his 31 year old mother, Chavonne Brown, on June 28, 2013.  There are no suspects.  There have been no arrests. There has been no news coverage, beyond local press.  No one is protesting. No one is carrying signs with Sterling's name or picture. No one is demanding the Police Chief resign.  There will likely never be any justice.

Justice for Antonio..... Sixteen year old Antonio Fenner appears to be guilty of walking down the street in his own neighborhood, near his home on July 1, 2013.  He was shot and murdered by gang bangers apparently shooting at a 32 year old gang member on the same street.  Naturally they missed the gang member that was the object of the attack.  It is rumored that "everyone knows" who committed the murder, but there are no suspects, no one will "snitch." There will never be justice for Antonio.

Justice for Damani ..... Damani Henard was just 14 years old when he committed the crime of attending his own high school, riding a bike.  He was shot and murdered just outside his school on July 3, 2013.  Once again there are no suspects, no arrests, no outrage, no protests, no national news coverage, no riots, and no news.  No national media pundits are calling for the Justice Department to get involved.  There will never be justice for Damani.  You will likely never read his name again.

Justice for Ed ..... Fifteen year old Ed Cooper was guilty of playing in the park with his friends when a gang of men piled out of a van and fired at the children, scattering the crowd. Ed was shot as he ran but continued to run for cover. He died in  a vacant lot down the street just a few days ago, on July 9, 2012. Suspects?  Of course not. Arrests? No and yet no one is protesting about the lack of justice. There will be no justice.

I could go on, literally forever, but I am sick to my stomach. I hate the media, I hate the lazy police departments, I really hate the supposed "leaders" like the Reverend Al Sharpton who only are interested in a crime if it fattens their wallets.  I certainly hate the Zimmerman protesters who will riot, assault police, destroy property and even commit murder themselves in their rage, but will never actually do one damned thing to help the genuinely needy in this country.  And I hate our communities who refuse to invest in our towns and people to give them a good education, jobs and to make them safer.