The Myth of the Tea Party

I like and I admire Thomas Friedman. And I certainly like and greatly admire former President George H.W. Bush. But Friedman's Op-Ed in today's New York Times, "Bring Back Poppy," may be the most stunningly stupid article I've ever read.

Friedman's error certainly wasn't his praise for former President H.W. Bush. His comments about Bush were spot on correct. Instead his fatal lapse into stupefying moronic idiocy was to somehow give total credit to about 60 neophyte Congresspersons for blocking common sense Tax and Spending reform. Somehow, amazingly, Friedman forgot there are 200 Democrat Congresspersons, not to mention 150 or so mainstream Republican Congresspersons, that could have stopped this madness at any time.

It's convenient and maybe even fun to blame the 60ish Tea Party Republicans for events they had absolutely ZERO control over. But you have to pretend that the entire Democrat caucus and their leader, Nancy Pelosi, don't exist or have forgotten how to vote. In reality it is the Democrats and the huge majority of Republicans that Speaker John Boehner DOES CONTROL, that have forgotten how to compromise. One tiny drop of real bipartisanship by the supposedly reasonable 365 members of the House and this all ends.

If Boehner and Pelosi were actually willing to do their jobs the Tea Party would be the irrelevant minority caucus that they really are.

What's happening here is that the Democrats have cleverly used the Tea Party as cover for their own failure. And Thomas Friedman and most of the mainstream media have fallen for the ruse.
Posted by Bob Keller at 7/31/2011 08:23:00 AM 1 comment:

The battling political armies in Washington D.C.seem to have no idea what is really going on all across America. To the Republicans and Democrats it's just who gets the political advantage..... who scores the most points with voters..... who can garner the higher poll numbers.

Washington is fiddling while America burns.

Here's an interesting anecdote sent to me by "Evan" in response to a Tweet I'd written:

"I heard an interesting interview with Ronnie Dunn about that song."

"When Dunn bought that song in 2008, he really liked it and wanted to put it on his record, but the producers told him that by the time they could get it recorded and released, the recession would be over and the song wouldn't have much meaning."

"The only difference... When the song was originally written, the line was "two dollars and change at the pump . . ."

A Cloud of Doom

No Deal: Debt Ceiling Talks Between Obama, Boehner Break Down

"Boehner sent a letter to his Republican colleagues explaining his decision to pull out of talks for a "grand bargain." Here are some highlights:

"It has become evident that the White House is not serious about ending the spending binge that is destroying jobs and endangering our children's future," he wrote, adding, "A deal was never reached, and was never really close."

"For these reasons, I have decided to end discussions with the White House and begin conversations with the leaders in the Senate in an effort to find a path forward.""

President Obama lacks the intellectual capacity to deal with this disaster. He has no vision, no plan, no ideas and a massive ego. Is ego an impeachable defect?

Peggy Noonan, long one of the President's biggest supporters and cheerleaders has had enough. She write for all America today when she says "Out of the Way, Please, Mr. President." You can read her entire essay here: The Wall Street Journal
Posted by Bob Keller at 7/22/2011 06:03:00 PM 1 comment:

A Glimmer of Hope

Perhaps I was wrong. Representative John Boehner might just turn out to be President Obama's Tip O'Neil. If so, we are fortunate, indeed. Compromise and strong leadership are needed right now from both President Obama and Speaker Boehner.

"The Obama administration has informed Democratic Congressional leaders that President Obama and Speaker John A. Boehner were starting to close in on a major budget deal that would enact substantial spending cuts and seek future revenues through a tax overhaul, Congressional officials said Thursday."

Read the entire article and say a little prayer of thanks that Nancy Pelosi is no longer Speaker.
Posted by Bob Keller at 7/21/2011 01:15:00 PM No comments:

"The Republicans and Democrats should get in a room until they fix it. Instead, they seem to be sloganeering at each other.... And it's not helpful. And it's really, I think, starting to wear on the American people. It's time for them to stand up, and go in, and be adults and fix the problem."

"[President Obama], you're elected executive to lead. And I think it's incumbent on the president to put the plan out there. You cannot wait for members of a legislative body to lead. The executive has an obligation to lead."

Political Parties Are Our Biggest Enemy 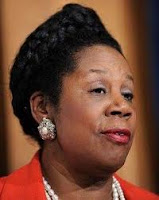 I'll admit that Representative Sheila Jackson Lee (D-Texas) is an idiot, but that is quite beside the point. Still, by making one of the most absurd speeches on record, she illustrates just how totally dysfunctional our two party system has become.

Jackson Lee said: "I am particularly sensitive to the fact that only this president — only this one, only this one — has received the kind of attacks and disagreement and inability to work, only this one."

Then Jackson Lee decided to jump completely off the cliff: "Read between the lines. What is different about this president that should put him in a position that he should not receive the same kind of respectful treatment of when it is necessary to raise the debt limit in order to pay our bills, something required by both statute and the 14th amendment?"

Here is EXACTLY WHY Jackson Lee is wrong. During the last (ultimately successful) attempt to raise the dept ceiling during the tenure of President George W. Bush, NOT ONE SINGLE DEMOCRAT SENATOR VOTED TO INCREASE THE DEBT CEILING. EVERY DEMOCRAT VOTED AGAINST THE BILL TO, as Sheila Jackson Lee so eloquently put it, "raise the debt limit in order to pay our bills, something required by both statute and the 14th amendment."

So, in spite of Jackson Lee's faulty memory, Barack Obama is, in fact, being treated exactly the same way President Bush was treated. It could be argued Obama is being treated with more respect.

This entire Washington debate is just bullshit! If you are against raising the debt limit, you should hold fast to that position. If you believe it is necessary, you should support it. Period. False rhetoric,, race baiting (as Jackson Lee just engaged in), and political posturing should be stopped.

If the political parties would get out of the way we might actually get something done in this country.

Alas, All For Nothing

I'll make a safe prediction this evening (5:30 pm CDT, July 14, 2011). Republicans will emerge from the debt ceiling increase/budget cut debates with absolutely nothing. The nation's Debt Ceiling will be raised significantly and there will be no budget cuts of any importance made.

In other words, America loses.
The reality is that the Republicans always had a losing hand. And they played it horribly with arrogance and stupidity. Anyone hoping to save our nation had to sit back in absolute horror as Representative Eric Cantor displayed ignorance and arrogance simultaneously.
The Republican position was untenable. Tax increases, or as the Democrats misleadingly describe them, "Revenue Enhancements" are inevitable. Had the Republicans not overplayed their weak hand, they might have engineered a significant budget cut in exchange for modest "revenue enhancements."
Instead we Americans get placed on the bus, with no brakes and no driver, down a slippery slope and a deep cliff. Look out below.
In the end, the Debt Ceiling WILL BE RAISED. There was never any doubt. How Eric Cantor or any Republican thought they could hold the government and American People captive is beyond imagination.
I don't look for anything to improve. President Obama is unbeatable (at this time, at least). And, while he's gotten pretty good at his job at his day job, he lacks any vision of the future and lacks any political power to push needed changes through Congress.
All we've accomplished is insuring that true and full government default will happen around 2016. Kiss your nation goodbye.
Posted by Bob Keller at 7/14/2011 05:33:00 PM 9 comments:

There are times when the media's double standard concerning liberals (or, more correctly, progressives) versus conservatives is simply stunning. And there has perhaps never been a better example than yesterday's instantanious suspension of pundit Mark Halperin from the MSNBC lineup for his inartful act of calling President Obama a "dick."

Within a few hours of Halperin's remark on the Morning Joe program, Halperin was gone, suspended indefinitely. MSNBC quickly issued an apology to their audience and President Obama. Halperin quickly followed suiit, falling on his sword, even going so far as to say MSNBC did the right thing in suspending him.

My purpose in writing this isn't to defend Halperin. Nor is it to condemn MSNBC. MSNBC has made several moves recently to raise the level of discourse on their network including a recent one week suspension of Ed Schultz for calling Luara Ingram a "slut."

None-the-less a gigantic double standard exists in the treatment of conservatives, especially at MSNBC. It was only six weeks ago that HBO's political superstar Bill Maher created a small firestorm by calling conservative Vice Presidential candidate and former Governor Sarah Palin a "dumb twat." Maher went on to double down with his blatant misogyny by calling Palin a "cunt."

Far from being condemned, Maher was defended by virtually all mainstream and leftwing pundits, because he is "only a comedian, not a news commentator or journalist.". Only that's simply not true. The REAL REASON Maher was defended is the mainstream powers that they all actually agreed with him.

Far from condemning Maher for his vile and blatant misogyny, Maher was "rewarded" with a full 30 minute guest spot on Chris Matthew's Hardball just two days after his sick remarks. For a half hour Matthews fawned over Maher as they discussed and "analyzed" the political events of the week. Matthews certainly never asked a single "hardball" question and simply looked to Maher for support and agreement as he dismantled each Republican candidate for President. Neither the "T" nor "C" words were ever used or discussed.

Maher is a regular visitor and guest on all MSNBC programs because he is in lockstep agreement with their generally progressive views.

But here is the bottom line. Use a mildly profane term to define a liberal, get suspended indefinitely. Use two significantly worse (but similar) term to define a conservative, get a full and featured 30 minutes on a major MSNBC program.
Posted by Bob Keller at 7/01/2011 04:13:00 AM 2 comments: