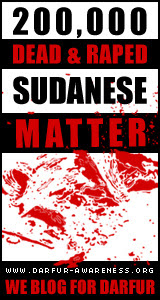 Cooper, blog owner and contributor over at Darfur: An Unforgivable Hell of Earth wrote a recent blog entry titled:

"One Day There Will Be No Darfur To Raise Awareness For."
That title is somehow inarticulate. It's certainly grammatically incorrect. It flows badly. But I found the message conveyed in the title so very compelling. So frightening. So very sad.

I've tried hard to re-write that title. I want to say what Cooper said, but cleaner.... clearer.... louder.... But I just can't say it any better.

Someday soon Darfur will be a memory. A blight on our history. A sad moment we'll all look back upon and say "Why didn't somebody do something?"

Maybe we will build a monument. Or a Darfur Genocide Museum. Maybe we'll have speeches and an annual "Remember Darfur" day.

But one thing is certain. Darfur will be over. Genocides all eventually die. The people all die.

First, of course, the victims die. In Darfur it's mostly the men and boys, murdered tortured, buried alive, burned to death and much worse.

Next comes the rape, torture and eventual murder and starvation of the women and children. The toll here is by all accounts over a million.

Villages have all been burned and crops destroyed. The men are all gone and the women have fled to refugee camps where all food, aid and support are withheld.

The wonderful Angelina Jolie is on a mission to Darfur right now to raise awareness, except she can't actually go to Darfur anymore. It's too dangerous. She can't even get close. She will visit refugees in Chad, which only a week ago begged for U.N assistance, but now, under massive military threats from Sudan, has rescinded its call for troops.

The U.N. has pulled out its humanitarian aid teams from Darfur for reasons of safety.

Even Warren Buffett is refusing to divest his massive investment in PetroChina at Berkshire-Hathaway. Buffett's sick rationale, "divestment wouldn't make any difference, anyway."

Sure, why not make gigantic profits while enabling the deaths of millions. The Sudanese government would just kill them anyway.

And, in the ultimate irony, the International Criminal Court at the Hague announced Tuesday that they "suspect" a former Sudanese junior minister and a militia leader of war crimes and crimes against humanity in the country's Darfur region.

Not enough evidence to actually have any indictments. You see only 450,000 are dead so far. And only a million people are displaced. And we can't get really good reporting. And Anna Nichole Smith's estate isn't settled yet....

So finally the last people will finally die alone of starvation, murder and neglect.

It's the only solution the people of the world, as a group, will accept.

Oh, I know there are few of us who are screaming, begging, working, praying and fighting to help. I know. But, every time one of us even goes so far as to make a blog entry we get dozens of replies that say "What do you expect us to do...invade another country?"

If a tree falls in the woods and there is no one around, does it make a sound?

If a person dies or is raped, tortured or murdered in Darfur and there are no television cameras or reporters, did she suffer?

What the heck! We all love a good museum. And who wouldn't want another holiday. We can all have a picnic and ask "I wonder why no one helped the poor people in Darfur?"

------------------------
Things you can do today, if you really want to:
Please follow this link to Darfur: An Unforgivable Hell on Earth and read this entry: Travesty, Politics, comments and Darfur is still Dying. Cooper has some important things to say about politics and the presidential derby.

Please pick up the phone this minute and call your Congressperson and Senator. Call everyday, until every staff member knows you by name. Be polite, but firm in requesting aid for Darfur.

Please write and call President Bush. Or, at least, fill out this post card. Better yet, if you have the courage, sign the petition supporting President Bush's "Plan B" of action in Darfur.

Write to Ban Ki-Moon, the new Secretary General of the United Nations. Believe me, he does care. We've made it easy. The link takes you to a web based form.
Wear, and never remove, your "Not on My Watch" green wristbands.
TECHNORATI TAGS: SAVE DARFUR BAN KI-MOON SUDAN CHAD WOMEN'S RIGHTS ANGELINA JOLIE HUMAN RIGHTS DARFUR GEORGE BUSH UNITED NATIONS WARREN BUFFETT BERKSHIRE-HATHAWAY
DIGG THIS
SAVE THIS PAGE TO del.icio.us
Posted by Bob Keller at 3/01/2007 08:49:00 AM

Email ThisBlogThis!Share to TwitterShare to FacebookShare to Pinterest
Labels: darfur

President Bush and Secretary of State Rice have outlined a plan with eight primary actions. This would most assuredly involve U.S. Military action.

2. Implement all sanctions and measures for which you were given legal authority when Congress enacted, and you signed, the Darfur Peace and Accountability Act, including blocking from U.S. ports those ships that have transported Sudanese oil.

3. Engage at the United Nations and with world leaders to enact the strictest targeted worldwide sanctions regime against Sudan’s leadership.

4. Develop and implement, with our NATO allies, of a no-fly zone covering Sudanese military flights over Darfur. This could be accomplished by immobilizing Sudanese planes known to have taken part in illegal bombing missions.

5. Engage with the United Nations to prepare and deploy a protection force for civilians in eastern Chad and the Central African Republic.

6. Prepare for the deployment of a credible and effective international force to Darfur to protect vulnerable civilians and ensure conditions for effective humanitarian aid. This should include a request to Congress to pay the U.S.’s full share of UN peacekeeping dues.

7. Produce a military contingency plan to respond to the potentially cataclysmic collapse of security and humanitarian aid networks in Darfur.

8. Begin building camps and barracks for phase II of the AU-UN hybrid force, for which $50 million has been included by Congress within the soon-to-be-passed FY07 Continuing Resolution.

Would the American people support such a plan? Would the Democrat controlled Congress? Would you?

vigilante Thinking of your most recent post in your website, these actions would involve actions well outside of anything authorized by the United Nations. They would clearly be outside "international law" since the Chinese would most certainly veto any such UN authorization.

I find your article raises far more questions than it answers.

Is the United States ever going to be able to take any "legal" international action unless it is pre-approved by the UN?

It seems to me that Clinton's bombing in Bosnia would clearly be illegal under international law. There was no UN authorization or even support for such actions.

It's all worth consideration.