This Christmas Season I've been thinking about "Intelligent Design."

And I want you to look at the pictures below and consider the wonders of life. God's amazing capacity for creation. These Turkish Angora kittens are simply beautiful. 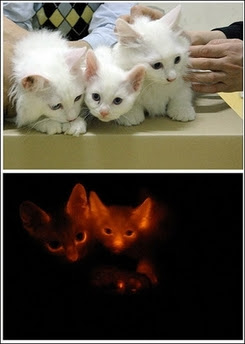 Except for the fact that they glow in the dark. And that these remarkable glowing kittens were designed by man.

Well, man did have a little help. The original design of the cat has existed for thousands of years. But scientists in South Korea did tinker with the genes and cloned these new cats that glow in the dark under ultraviolet light! Genetic engineering is advancing at light speed (if you'll pardon the pun).

The South Korean Ministry of Science and Technology reported Wednesday that "South Korean scientists have cloned cats by manipulating a fluorescent protein gene, a procedure which could help develop treatments for human genetic diseases."

It is a side-effect that the cloned cats glow in the dark when exposed to ultraviolet beams.

The Ministry's Press Release continued "The ability to produce cloned cats with the manipulated genes is significant as it could be used for developing treatments for genetic diseases and for reproducing model (cloned) animals suffering from the same diseases as humans."

And yet all this is happening while we have candidates running for President who absolutely refuse to acknowledge the possibility of evolution or other basic scientific facts.

And it's happening at a time where religious fundamentalists deny women in almost 1/3rd of the world even the most basic of human rights. The right of women to vote, the right to own property, the right for women to even walk alone in public is forbidden in all too many countries and regions of the world.

Today we have adorable kittens that glow in the dark. How soon will it be until every child wants one?

How soon will it be until scientists endow kittens or puppies or horses or cows with the intelligence of man? It will happen. Will we give them the right to vote? Don't laugh. The question will arise.

And we will "improve" humans, too. For better or worse.

If are scientists are truly gifted maybe they can create human leaders who won't continue to deny basic scientific facts.

And maybe, if our scientists are truly gifted, they can design humans who will actually treat other humans with the respect, honor, and dignity that each one of us deserves.

Or maybe we will just glow in the dark.