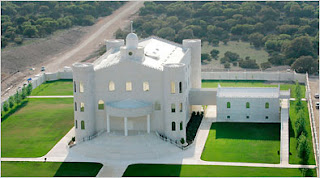 Could a deranged woman in Colorado Springs, Colorado call the police and accuse you of child abuse or rape and have the police bring an armed assault force to break into your house and take your children into "protective custody?"
That's exactly what happened this week in El Dorado, Texas. The woman, who has a long history of making false abuse claims, called long distance from Colorado. She claimed to live at the Yearning For Zion compound in El Dorado, Texas. In repeated calls that may have continued for two weeks, she accused her imaginary husband of rape.
And Texas responded in full force. They sent a veritable army. They expected a war.
Hasn't anyone in Texas ever heard of "Caller ID?" And what ever happened to old fashioned ideas like investigation?
Texas had four years to investigate the compound. A simple Google Search would have yielded plenty of information about the Fundamentalist Church of Latter Day Saints (FLDS), most important their demand that sect members practice polygamy, illegal under Texas law.
But that never happened. Instead a false claim by a very sick woman has yielded the results that critics of the sect have long desired.
The state removed all 416 children from the compound and are holding them in frankly disturbing conditions. Families are split apart and all children over the age of 4 have been forcibly separated from their parents.
Experts say this will continue for many months. The court today decided to continue the state's custody. And they ordered DNA tests in hopes of proving some children were born to mothers under the age of 16.
It's a pretty good bet that there have been forced marriages and polygamy and children born to young teens. But, lawyers tell me, it's unlikely that anyone will ever be prosecuted. No one is going to jail.
But some children may end up in foster care. And, under Texas Law, the court battles will go on for years and will likely result in many children ultimately returning to their parents, though perhaps not to the compound.
Many of my readers think that's a good thing.
I hate the fact that the State of Texas was unable or unwilling to do their job. Instead, they've made a mockery of the judicial system, and all of us are more vulnerable because of their failures.
The New York Times has an excellent investigative article here.
I encourage my readers to also read a strong opposing view presented by Utah Savage. Be sure to read the extended discussion by her readers. This is an important issue that does involve all your civil rights as well as the illegal activities and the lifestyle of the FLDS.
Posted by Bob Keller at 4/18/2008 11:33:00 PM

Thanks for the link, Wiz. I'm working on a piece about a woman I have known all of her adult life, who is the youngest child of a polygamist family. I have said that polygamy is the gift that keeps on giving, much like untreated syphilis. I will post many such pieces trying to personalize the damage a polygamist culture does to each new generation. There should be DNA tests done in all the parts of the country where these groups take root. Then look at the social/societal problems, like sex abuse of very young children, like drug use, like homelessness of many young men, like poverty and all the other ills that isolation and institutionalized sexual abuse and forced child birth in very young girls, lack of education, etc, brings or exports into and onto the backs of regular tax paying folk who live around them...........I could go on and on and probably will at my place.

The first of two comments:

My home town, Colorado Springs, is the national center for deranged, holier-than-thou types, of both genders. (Neversomore than after my departure, 45 wonderful years ago.) The state of Colorado would not be unduly intrusive and would do the entire nation a service if it disconnected all telephones in El Paso County. Much future mischief could thereby be avoided.

I think it is appropriate, on this 15th anniversary, to point out that the Branch Davidians in Waco constituted just another closed, secretive, sexually abusive cult that was left to fester unattended too long, with horrific consequences. David Koresh was a charlatan and a false prophet. The tragedy at Mount Carmel in '93 will forever be on his head.

On second thought, you may be right!

How ironic, I have a bunch of family in Colorado too. This must be some kind of mecca . . .

Anyway, I think this is a good and important issue that's been brought to the fore in Texas. It says alot about the balance between freedom and justice in theis country. I, for one, shudder at what happens behind closed doors in some of these compounds, ESPECIALLY where children are concerned. My prayers are that these people are revealed and the children saved from the depravity.

However . . . at the same time, this is the United States of America, where the burden of proof is (at least on paper) in the accuser. We must be careful not to let our zeal for prosecuting the lawless overrun fair and due process of the law.

I'm a student of history, and I'm increasingly surprised how slippery the slope away from individual liberty becomes. We have to remember to keep the government on a short leash, regardless of their good intentions. The income tax started with good intentions.

We need more income taxed, not less! End the tax cuts for the rich! Whoahhh!