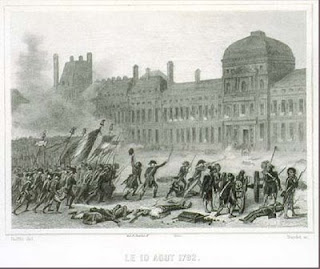 As I watch television this weekend and watch the protesters in New York DEMAND that the governor "tax the rich" instead of cutting services, I feel like I'm watching the French Revolution unfold before my very eyes.

Class warfare was at the very heart of the French Revolution! In 1789 and for ten horrific years, the country of France imploded. Millions of people died. The government was overthrown and virtually the entire upper class of French society was executed, including King Louis XVI and the legendary Marie-Antoinette. It's the stuff of legend, including many great (if highly romanticized) movies.

While I don't think for even one second our country runs the risk of revolution, many of the factors that led up to the French Revolution are identical to the situation in the United States today.

Economists tell us that recessions and depressions are cyclical. In the late 1780's France was in the midst of a major depression. But here is where the parallels get much more interesting. France was saddled with a massive National Debt. Fighting two wars had caused King Louis XV to borrow huge sums of money. Keep on mind one of those wars was the American Revolution. France had sided with and aided the colonists against England.

But the huge National Debt was way too much for the government to handle. Faced with this crushing debt, the government instituted massive tax increases on every part of society, including and especially the rich. The gigantic tax burden brought the French economy to a complete standstill. The very financial backbone of the country was broken in a manner not unlike today's banking crisis! The movement of goods and services came to a halt!

Unemployment exploded! People were unable to find work. The French monetary system stopped working and massive inflation robbed the poor from even the most basic necessities. People literally people could not afford bread.

Meanwhile King Louis and his advisers were unable to cope with the rapidly deterioration of the country's economy. Ultimately the entire country collapsed under the weight of an unrepayable National Debt.

The people of France blamed the rich! They felt, however incorrectly, that the rich were causing the problems as a ruse just to rob the poor and enslave them. This was, of course, untrue and the rich, the aristocracy, were also suffering from the complete breakdown of society. None-the less, massive protests occurred that deteriorated into riots and, ultimately, into revolution.

The goals of the revolution were noble, at least in theory. Liberty, Equality and Fraternity! The rich were forced to pay the ultimate price with the invention of the guillotine.


George Mason University has built a magnificent on-line library and resource center to study the French Revolution with hundreds of essays, text documents, images and even songs. I continue to be amazed with the sheer power of the Internet.

In another interesting parallel, it was King Louis XIV who began a centralization of power that led to the very downfall of France. Prior to that, France was a very model of decentralized capitalism. Only when Louis XIV centralized power to the Monarchy was it even possible to build the huge National debt that led the country to its downfall. But Louis XIV and Louis VX felt the government could run society better than the free market!

The sections of the George Mason University Website that discuss the monarchy are especially interesting.


Can anybody say "Rush Limbaugh?" But I digress.


Like Louis XVI, our President is failing to focus on the rapid deterioration of the economy or on the National debt. Instead, like the French monarchy, he is centralizing authority and control of society. We defend Obama because he wants to help the poor and improve their life. But, keep in mind, so did King Louis the XVI.

As the economy falters, President Obama is determined to implement a wide array of social programs and isn't letting the economic situation distract him from his predetermined agenda.

Don't think for even a minute that the United States can't fail under the weight of massive national debt. It can, and if the problem isn't addressed quickly, it will.

We are in a full blown Depression. The stock market has crashed. People's entire life savings have been wiped out. President Obama is spending hundreds of billions of dollars completely without regard to the widespread damage the non-stop borrowing and spending is causing.

We are a peaceful and enlightened country. The lofty goals of Liberty, Equality and Fraternity born in the French Revolution have taken root and grown here in the United States.

Revolution will not happen in the United States. The guillotine will not return. But the collapse of our modern day Camelot is not an impossibility. We are in a full blown Depression, just like France in the 1790's.

POST SCRIPT: Two very interesting things struck me as I read about the French Revolution. First, King Louis XVI was enormously popular throughout the revolution. He had very broad support of the people right up to, and even after, his execution!!

Second, the relative democracy of King Louis XVI's France (there was an elected Parliament with three houses of government (nobles, commoners and clergy) and an independent court system) was replaced with an absolute dictatorship of Napoleon.

The richest 1% pay 39% of the taxes. The richest 5% pay 60% (both stats from the U.S. Department of the Treasury). Can we squeeze a little bit more out of them? Maybe. But at some point, not only does it become punitive, it has to be a disincentive, too.

Thanks for your comments on my site. I had several students write about lyrics. Handy information you sent me. I will share it with those who choose to do that topic next quarter.

Sorry I am not as prolific as you are here...

But I did write a new one!

I am not totally convinced that revolution will not happen here. Gun and ammo sales have been going through the roof since Obama was elected. I suspect people are mostly stockpiling in anticipation of tougher gun laws in the future, but many are also stockpiling as insurance in case of civil unrest or outright revolution.

To be sure, the threat of great civil unrest or revolution is small, but it feels greater now than in the past. My memory goes back to the 60s, and I have never seen anything like it.

We are a peaceful and enlightened country. Shirley, you jest.

I do not jest..... We are both peaceful and enlightened. And stop calling me Shirley!

Shoo you really do babble nonsense. Those who are gathering guns are the red-neck morons whose racism runs so deep they are convinced that they are in the majority and that the country will rise up against a black president. I have never seen one group of people, Republican fanatics in this case, go so berserk over the election of one man. That one man, by the way, will go down in history as one of our greatest presidents.

"Those who are gathering guns are the red-neck morons whose racism runs so deep they are convinced that they are in the majority and that the country will rise up against a black president."

Do you have the slightest bit of evidence of this statement, or are our just babbling your own ignorant stereotypes? No doubt there are some like you describe. I don't personally know any, and they certainly are not in the majority.

The people I know are very concerned about the loss of liberty and tyranny that a socialist will bring. They are concerned about possible civil unrest should the economy tank significantly further. That is why they are stockpiling guns and ammo. Racism doesn't have the slightest thing to do with it.

No one went beserk over the election of Obama. In fact, most conservatives I know where quite willing to give him a shot and see what he did. Unfortunately, instead of governing from the middle as so many people assumed (why, I don't know), he instead is realizing the worst fears of the Right.

I predict he will not only not go down as one of our worst Presidents, but by the time he leaves office, no one will want to be known as a Progressive anymore.