Brownie, Your Doin' A Heck of A Job! 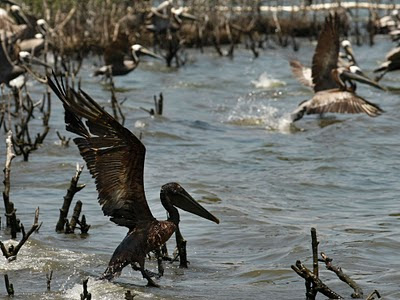 If we even needed an example of just how bad government bureaucracies are at handling a complex crisis, one need look no further than the oil spill disaster now befalling the marshes and wetlands on Louisiana. The inaction, waffling, internal debate and inaction on the part of the Federal Government, fully in charge of the clean-up and protection of our coasts, makes Michael Brown, Bush's oft vilified FEMA head, look like an administrative genius.

Our Federal Government couldn't possibly do any worse, because they are generally doing nothing but actually stopping the efforts of state and local governments. This is a disaster of inaction and incompetence.

The Army Corps of Engineers is unwilling to make a decision on how and where to deploy oil skimming beams or how and where to build sand berms to stop the oil flow. Each hour of indecision is killing the fragile gulf coast.

This situation of so bizarrely stupid that local parishes are actually commandeering and deploying hundreds of Federally chartered boats and putting them to work in fighting the spill. No one is Washington is willing to make a decision.

Perhaps the greatest irony is the failure of the major news networks or the cable news networks to even give anything more than marginal coverage to the spill itself. While they are covering the infighting in the House and Senate and the daily battles between BP and the Obama Administration, what is missing is the very real human drama unfolding on the coast. No shows or anchors have been deployed to the coast.

The best coverage I've found is on National Public Radio. Be sure to listen to these reports and tune into NPR each day until the networks wake up from their politically induced coma:

I do also want to compliment The Huffington Post for their excellent coverage of the environmental disaster.
Posted by Bob Keller at 5/24/2010 02:19:00 PM

He writes today over on the Huffington Post: The Great Shame: America's Pathetic Response to the Gulf Catastrophe

"A calamity is unfolding before our eyes - the greatest oil spill in history - and America's response is little more than a big yawn."

"Where is the outrage? Where are the millions marching in the streets, where is the round-the-clock roadblock coverage tracking every moment of the crisis, every effort to plug the leak, every desperate attempt to mitigate the damage?"

"We need, and must demand, boldness and resoluteness worthy of a planetary emergency - true leadership, rallying the nation and the world to action. Offense, not defense. We're not getting anything close to that from Democratic leaders. And from Republicans, far less."

"America is perfectly capable of extended, intense, undivided attention. Michael Jackson's death is a good example. But for some reason, the Gulf disaster can be sidelined by an offensive remark from Rand Paul or a meaningless debate over Elena Kagan's sexual orientation."