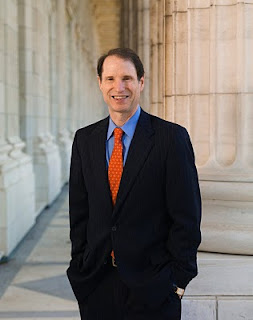 Senator Ron Wyden of Oregon is deservedly making very big news this September with his very public break with the infamous ObamaCare bill. He is making all the right moves to insure his state and his constituents will not be taking part in the least popular parts of this Federal Government boondoggle.

Last Spring, when we all discovered that the President and the "powers-that-be" were not going to listen to the near brilliant common sense approach to health care reform being championed by Senator Wyden, he very quietly snuck an "state opt-out" provision into the 2,000 plus page bill. Of course nobody read the damned bill anyway, but that only made Wyden's move easier.

Now Wyden is helping Oregon use the very opt-out he provided to escape the most unpopular provision of the bill and to replace it with a sate bill that might actually work.

You can learn all about Senator Wyden's approach to health care and his recent efforts to opt-out Oregon in these articles:

The Hill: Wyden Makes His Case for Health Care Waiver

Wyden is in a tough re-election battle. I hope the (much needed and much deserved) Republican Sweep this November doesn't rob the Senate of one of it's brightest members.
Posted by Bob Keller at 9/04/2010 09:56:00 AM

Did he vote for it in the first place? I don't care how bright he is, if he participated in foisting this thing on us, then he needs to be unemployed.

Wyden did vote for ObamaCare. But only after he inserted his little "Get Out of ObamaCare Free" amendment into the bill.

If only the Dems had listened to Wyden in the first place we wouldn't have this mess now. Among the key provisions Wyden wanted was to allow Insurance Companies to sell across state lines.

...much needed and much deserved) Republican Sweep this November...

What have the American people done to deserve a return to Republican government?

Doc, If I only had time I would blog every hour of every day about the absolute horror being visited on our economy, our health care system and ESPECIALLY on our seniors by the passed and signed Health Care Reform and Restructuring Law (often referred to as ObamsaCare).

This 2,600 page nightmare will rapid destroy our health care system and may well deal a death blow to our economy. Any Congressperson or any Senator who voted for this abomination should be defeated at the polls unless he renounces his vote, begs forgivness from the Seniors in his district and vows to aid in the repeal or modification of this act.

Here is just one tiny example of the havoc about to be visited upon the public: The health law’s massive Medicare Advantage cuts

Single-Payer, Canadian style is the only way to go!