This is a really short post prompted by the new POLL showing the Newt Gringrich is about to pass Mitt Romney even n the "firewall" state of New Hampshire.  Here is the link: Poll: Gingrich, Romney in Dead Heat in N.H. 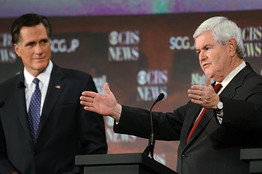 Here's Mitt's problem in a nutshell. The Mitt Romney who was the excellent governor of Massachusetts could have won easily. I would certainly have chosen him over Barack Obama and so would many others. He was the perfect Republican, intelligent, thoughtful, compassionate and honest. He could have easily overcome the few issues where he didn't match the far right wing of the Republican Party.


But that Mitt isn't running. Instead he reinvented himself into the far right wing Romney. His problem is that nobody believes him. Those who appreciated the bravery of the original Romney feel betrayed he has so easily abandoned his principles. And far right conservatives just think he's full of shit.


His only support comes because the liberal media keeps telling Republicans, desperate for a victory, that Mitt's the only candidate who can beat Obama. But there is no passion there. Hell, there's no there, there. Mitt would go down to defeat in a pattern similar to John McCain.


Republican's have no enthusiasm for Romney. There will be no grass roots effort. The election will be boring with everyone from both sides staying at home.


Now, I'm on record saying nobody currently running can beat Obama, so it hardly matters. Newt, Mitt, Herman, Rick... they'll all go down to defeat.


I've often said that a candidates ability to hold to his principles matter more to me that party or even political positions. With that standard it's not possible for me to vote for Mitt.
Posted by Bob Keller at 11/18/2011 02:40:00 PM

It's true that no one is excited about Mittens, outside of his wife. He's a prime example of a RINO, a media favorite because he exemplifies the comfortable Beltway insider who doesn't really have any strong principles outside of getting elected and staying in office.

The conventional wisdom is that nominating anyone who isn't a true conservative will cause the base to stay home. They did that in 2008, and we can see the result. I find it difficult to believe that the conservative and libertarian voters who despised McCain (with good reason) will vote their principles again and saddle the country with a second term for Obama. Four more years of his incompetent tyranny, and we're well and truly fucked.

The conventional wisdom is, as usual, wrong. A cardboard box could beat Obama. I don't see any way for the economy to improve in any substantial way before the next election because as much as Obama cares about getting re-elected, he cares more about advancing his Marxist agenda. He simply won't let up enough to make any real headway. The pipeline decision is proof of that.

If you think that the 2010 elections were a bloodbath, wait until the next one. All those people who came out to Tea Party rallies, and who caused such havoc in the primaries, are still out there, and they're just as pissed as they were then. Anyone who thinks those OWS clowns represented any significant percentage of the country are in for a rude awakening.

Romney's support is in the media and Republican establishment, where they're just happy to keep their place at the trough. There hasn't been a single vote cast at this point. A bunch of pointless debates that no one really watched are supposed to tell us who the front-runner is at this point. Don't buy it.

I kind of lost my train of thought there, so that might not make as much sense as I'd like.

Actually you made a lot of sense Chris and I agree with 95% of what you said.

The Tea Party is a genuine grass roots movement with great power and principles. OWS, on the other hand, has no point, no power and no principles. Far from representing the 99%, they are really about .00001% and none of them will vote.

That said, unless Newt (or someone) can combine Tea Party enthusiasm with the approval of middle America, Obama will win in a cake walk.

If the American people are stupid enough to re-elect the worst President of the modern era (and quite possibly ever) then we deserve to go into the fascist night that Obama and his cronies have planned for us.

I like to be an optimist, which is a pretty good trick for an obnoxious prick.

Democrats are not liking four more years of this Obamanations.