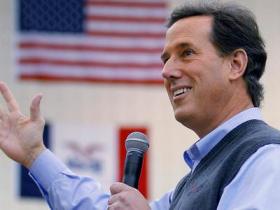 I like the sarcasm in your "Consoling Fact" at the end.

I'd like to see the assumption that a social conservative is unelectable taken for a drive and shot, if possible.

This has been the conventional wisdom for so long it's become a shibboleth, at least in my opinion.

The only way to find out is to run one in the general election.

I like Rick Santorum too, but he would suffer the same non-stop slurs and attacks that Sarah Palin did and make him unelectable as President. I'd love to have his voice back in the Senate.

As for Mitt, I disagree and think he can win. If the election were held today, he would probably lose, but November is a long ways away, near an eternity in politics, and the independents who are going to decide this election aren't even paying attention to the Republican primaries right now.