The Cesspool of Hate and Hypocrisy

The top link above STORY ONE takes you to an op-ed essay in The Huffington Post by Larry Doyle, a work he now claims is satire.  I had intended to write today's blog entry entirely about the strange logic and blatant hypocrisy of Doyle's hate filled screed.


But then Andrew Breitbart died and any small point I might have wanted to make about hate speech on the Internet exploded in my face.  In fact Breitbart's death created a nuclear explosion of hatred in the blogosphere and the Twitterverse.  My small essay was reduced to radioactive dust.


Just when I couldn't imagine the discourse becoming any more toxic, enter Rush Limbaugh with his laser guided venom filled missiles lighting the ionosphere.  Mere Bloggers and Twitters are no match for El Rushbo, whose "talent is on loan from God."  I know that's true because Rush said so.


Just how powerful was Rush's poisonous attack?  So toxic the President of the United States himself felt compelled to weigh in and condemn El Rushbo.  Thank you President Obama for making the point I wanted to make.


Why am I thanking President Obama? Not for defending Georgetown student Sandra Fluke, who, in fact, never needed any defense.  But instead for providing the highest example of our hypocrisy toward hate speech.


Obama proved the point I wanted to make: HATE SPEECH IS ONLY HATE SPEECH WHEN IT COMES FROM THE OTHER SIDE.  President Obama condemns Rush Limbaugh who called Sandra Fluke a "slut." 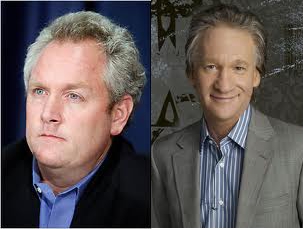 ANDREW BREITBART & BILL MAHER LOOKED
REMARKABLY ALIKE. COULD THEY HAVE BEEN TWINS?

However, there is one man on earth who is consistently more vile, more vulgar and much more of a misogynist than even Rush Limbaugh and that's Bill Maher.  Maher's famous televised attacks last year attacking Sarah Palin went far beyond the mild term of "slut,"  preferring to use the words "dumb Twat" and "Cunt" instead.  Maher doubled down, refusing to apologize for his remarks and upped the anti to make even more vile comments.


Did President Obama condemn Maher?  Did Obama call Sarah Palin and give her his sympathies for the rough nature of political debate in this country?  Nope.  Instead Obama happily accepted a $1,000,000.00 (one million dollars) donation from Maher.


THE BOTTOM LINE IS THAT MOST FOLKS CAN ONLY SEE HATE SPEECH WHEN IT'S SPRINGS FROM THE OPPOSITION.  THEY NEVER SEEM TO RECOGNIZE IT ON THEIR SIDE OF THE POLITICAL SPECTRUM, EVEN IF IT SPRINGS FROM THEIR OWN PEN, KEYBOARD OR MOUTH.


In STORY ONE above, Doyle writes one of the most disgusting essays every written about any religion in order to teach conservatives a lesson that they should respect Islam.  It's a lot like a father who beats the living crap out of his son in order to teach him not to be a bully.  As we say on Twitter, #EpicFail.


And in STORY TWO Malkin illustrates how folks condemn Breitbart's "hate speech" by using even more vile and disgusting hate speech themselves.  If they really hated Andrew Breitbart's hate speech, why did the imitate it so precisely?


And finally from STORY THREE: President Obama, if you really hate the lowering of civil discourse, why can you only ever seem to condemn it in your opponents, yet accept huge donations from serial haters on your side of the political spectrum?

ADDENDUM 3/4/2012:    As my friend Lee pointed out (see his comments to this post), Rush Limbaugh has apologized to his listeners and to Sandra Fluke.  It must be noted that Rush has been under intense pressure from a left wing campaign to boycott all his advertisers.  As of this morning seven advertisers have cancelled their sponsorship of Limbaugh's program.


I have edited my original blog entry to correctly reflect these recent developments.  I also plan a follow-up post on this issue, especially in reference to Carbonite, one of Limbaugh's ex-advertisers.

Ahhhh..... Mitt Romney was "ambushed" by his off-the-air reporter pool during a campaign autograph session and offered a "notably mild response" to Rush Limbaugh's attack on student Sandra Fluke.

So you can file Romney's continued lack of even the most modest of leadership skills under both "Wht Mitt Can't Win" and "The Hypocrisy of Hate Speech."

You can bet that if a Democrat had used similar hate speech to Limbaugh's Romney would have made a major speech and condemned it roundly. But he cowers before El Rushbo's mammoth following among Republicans.

Rick Santorum has significantly better leadership skills. He took the same question on television directly from CNN's Wolf Blitzer and handled it well, cleverly condemning Limbaugh's words while labeling Limbaugh as an entertainer who makes such comments as part of his show.

I would like to point you to an apology by Mr. Limbaugh.

A Statement from Rush

Lee, Thanks for your prompt post. I had just signed on to add the very link you provided moments earlier. Rush was following in Ed Schultz's well worn footsteps.

Now I thought Rush handled his "apology" rather well. He made certain that he didn't retract his point or opinion of mandating contraceptive costs, but merely provided context.

However, nothing Rush said remotely diminishes my point. Folks only see hate speech when their opponent says it.

Your point stands. The part of your blog that needs addressing is this: " Like Limbaugh, Maher doubled down, refusing to apologize for his remarks and upped the anti to make even more vile comments."