It seems to me that North Carolina Governor Bev Perdue is framing the Gay Marriage issue in terms that most Republicans and most conservatives will understand. Such a ban is "Bad for Business."  It will hurt North Carolina's image and hurt tourism.  It "hurts our brand." 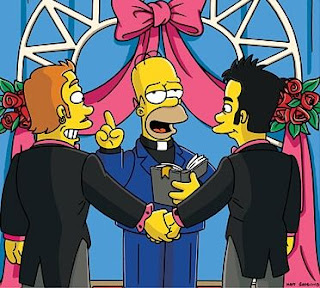 As I noted in my previous blog entry, "Call Me Maybe," the public, especially the younger generation, is accepting of gays, lesbians and the alternative lifestyles involved. But our political elders still want to exploit the issue for political gain. In this case the foolish North Carolina Legislature is using an unnecessary Constitutional Amendment as a wedge issue. I;m hoing the voters in North Carolina are wise enough to reject this amendment.


As I pass out "Kudos" I would be remiss not to congratulate Vice President Joe Biden for being unusually candid and remarkably brave in facing the gay marriage issue head on.  It's a path both President Barack Obama and Republican Candidate Mitt Romney are afraid to take.  Both are constantly waffling on the issues of gay rights.


If you read the POLITICO story above you'll note even Governor Perdue is waffling a bit.  I think she would find her approval rating would actually go up f she were clear on the issue.


Also read B. Daniel Blatt's excellent essay on the North Carolina Amendment from a GAY CONSERVATIVE REPUBLICAN'S perspective: The conservative case against North Carolina’s Amendment One
Posted by Bob Keller at 5/08/2012 11:01:00 AM

You keep framing this as a Rights issue. I do not see it that way.

Boy do I stand corrected!!!!!
I thought the country was considerably more accepting of gay marriage. The Fine people of North Carolina have proved me wrong - OVERWHELMINGLY.

Clearly I misread (or was flat out mislead) by the popular culture icons (i.e. the Hollywood agenda).

Lee, If not a Gay Rights issue, how do you see this question? Clearly I need to learn from you (seriously). Give me some feedback.

At least I'm timely with my topics. Moments ago Barack Obama announced his support for Gay Marriage.

As you already saw, I opted to post on my blog. (Lee's tid bits)

Looking at this as a rights issue has always struck me as absurd. If "anybody should be able to marry anybody else" is a right, then what is to prevent a father from marrying his daughter, brothers and sisters marrying, etc? How can you then argue against polygamy?

At some point, you have to recognize the absolute biological and moral basis of marriage.

Will a gay marriage ban really be bad for business? Remember that social conservatives participate in commerce too. I know that this is anecdotal, but myself, I am more likely to vacation in a state that values traditional marriage values. I don't want to expose my children to seeing two men walking hand in hand on the beach.