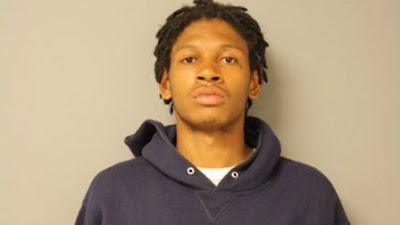 This eighteen year old in a hoodie is not Trayvon Martin, although I'm willing to bet if you showed his picture to any random hundred people at least half would tell you it's Trayvon and probably launch into a rant about injustice in America.

However, this eighteen year old is Antonio Lewis and he was arrested yesterday for the cold blooded murder of five year old Sterling Sims and his mother, 31 year old Chavonne Brown.  You might remember I wrote demanding JUSTICE for Sterling Sims last July 16th.

Sadly Antonio Lewis is just one more tragic example of the dysfunctional world that is the south side of Chicago.  In Chicago and across America murder rates of young blacks has reached genocidal proportions.

I keep saying that guns don't kill.  But police that fail to lock up a young man arrested not once, but twice, for illegal use of a firearm in the months leading up to the killing of a 5 year old and his mom deserve a lot of blame for the murders they might have prevented.  What the hell is going on in Chicago?

The police might never even have arrested Antonio Lewis if not for the fact Antonio was shot himself in another act of Chicago street violence less than 24 hours after he shot and killed little Sterling!

Lewis was shot in the back, neck and groin in a separate incident.  Reports I've gathered so far give no indication of his shooter has been identified or arrested.

However, as of last night, Antonio Lewis has been charged with two counts of murder and one count of attempted murder.  If he recovers from his very severe wounds, he faces a lifetime in prison.

So Sterling Sims will receive some sort justice, if that actually matters after a five year old's life has been cut short. Somehow I'm even more sad than ever.

Sterling Sims older sister Sabrina made this tribute video for her little brother Sterling and her mother Chavonne.  Please join me in watching this and working to bring an end to our American Genocide.