The Unfolding Nightmare of The (Totally Unaffordable) Affordable Care Act

It is possible to write a thousand essays about the failings of the Affordable Care Act, each covering a different aspect of this ill conceived and horrifically executed piece of legislation.

Then one could write a thousand more about the damages done to America and the American citizens at the hands of ObamaCare and the mindless bureaucrats charged with implementing this nightmare of a healthcare system.

Everytime I go to write a blog entry about ObamaCare I'm despondent I haven't written more and sooner. 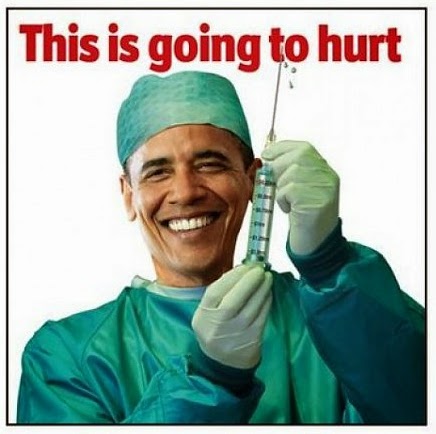 But today the "other shoe" dropped for the small business where I work.  The insurance provider (Blue Cross/Blue Shield) was unable to renew the current policy and replaced it with a new policy that complies with the absurd requirements of The ACA (affordable Care Act or ObamaCare as it is unpopularly known).  The new play is a "silver level" plan

Here's the good news - the premiums only increased 15%.  The Board of Directors quickly decided to absorb all of the cost increase, passing NONE of it on to the employees.

But the bad news is devastating,  Deductibles and copays have skyrocketed.  Effectively employees who face a major (but far from life threatening) illness or injury to a member of their family could face copays and deductibles of over $12,000 or more!! Previously, under similar circumstances an employee would have paid under $2,000.00.

Likewise prescription co-pays skyrocketed, from $9.00 for a generic drug to $40.00.  Brand Name drugs jump to $120.00 or more under certain circumstances.

Co-Pays and Deductibles cover every conceivable procedures individually, so they multiply exponentially for a hospital stay, where x-rays, ct-scans or MRI's might be needed before surgery.

My good friend Steve keeps singing the praises of Obamacare in his blog here. Sadly I don't believe his experience is the same as younger, lower to middle income workers.

Middle class Americans can raise a family of four (especially if they are married with a working spouse), but little is left for savings.  But even with a middle class income of $40,000.00 to $65,000.00 annually, they cannot afford to get sick with the co-pays and deductibles they face under the new ObamaCare compliant insurance policies.  Even a minor illness or accident with place the average employee into deep debt our total bankruptcy.

Can you imagine an illness striping you of 1/3rd our your annual take home pay.  Name one middle class person who could afford that cost.

Based on this astonishingly bad news, the Directors of the company where I work are looking at ways to increase employee coverage to the "Gold" or even "Platinum" level of ObamaCare.  But even Platinum will increase deductibles and co-pays over the old plan. If the decision is made to upgrade the level of the plan then monthly premiums will skyrocket.  There are no good options.

In spite of President Obama's dishonest effort to delay the implementation of ObamaCare plans for employers and corporations until after the November election, the insurance companies will roll out the new plans on a company's annual renewal date.

This may be the first story you read, but it won't be the last.  Look for hundreds more over the next few months.  As this rolls out it seems unlikely any Democrat can be re-elected.

Explain to me again how President Obama and his allies should have my full support in his efforts to destroy the middle class in America.

Chris, I'm so pleased you return to read all essays.

I still believe politics should stop at the American border, so Senator Cruz should support President Obama in his dealings with Putin during the current international crisis. Cruz will be even stronger if he stands united with President Obama.

That doesn't mean we can't criticize him and/or his policies here at home. His failures in developing and implementing ObamaCare deserve our criticism. it is even acceptable level criticism of his foreign policy approach.

And yes, President Obama's policies, whether intentional or not, are destroying the middle class. It is tragic.

I agree that politics SHOULD stop at the border. They did not when George W. Bush was President. Democrats profited by attacking Bush at every turn, abetted by the media.

Playing nice when your opponent is out to destroy you is admirable, but stupid. The partisanship will not cease until it becomes politically costly. As long as the legacy media is a functioning part of the Democrat party, then it will not.

Vituperation and division have worked for the Democrats. They have no incentive to stop using them, and Republicans are foolish not to respond in kind. A bully does not quit bullying until you knock him down.