A Day of Silence

The three Internet Radio Stations that comprise our WIZARD RADIO BROADCAST GROUP, along with the SaveNetRadio coalition and most Internet radio stations throughout the United States will be participating in a Day of Silence on Tuesday, June 26th. 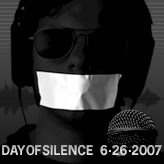 We will be joined by all 10,000 Internet Radio Stations that are part of the Live365 Radio Network.

Here's what you can expect: Free listeners who tune into WIZARD RADIO will be redirected to a Day of Silence stream that offers an explanation of the Day of Silence along with broadcaster testimonials from many of the 10,000 stations.

Listeners will be asked to help Save Internet Radio by calling, writing and emailing their Senators and Representatives.

If you don't want to give up Internet Radio for the day, you are invited to become a Live 365 Preferred Listener, a VIP (if you haven't already joined this elite group). VIP membership cost less than two cups of coffee a month!!!! With a VIP membership at Live365 you can always listen to all 10,000 stations AD FREE!! It's one great bargain.

If you are a VIP Member of Live365 you will still hear a special Day of Silence Announcement, but then be connected to WiZARD RADIO's special and very exciting programming for the 26th.

The Day of Silence will bring much needed attention to the danger Internet radio is encountering.

We apologize for the disruptions this will cause, but we feel drastic measures are necessary.

Remember, WiZARD RADIO PAYS all artists, musicians and even the record labels for the privilege of playing their music. We already pay the highest royalties in the entire world!!

Remember, AM and FM Radio DOES NOT PAY artists, musicians or labels any royalties at all.

As our reward for actually stepping up and paying musicians, the recording industry wants to raise those royalty payments to astronomical levels. Every single Internet Radio broadcaster will be forced off the air.

And AM and FM Radio will still pay nothing.

If you don't help us today, you can look forward to Silence..... not just on June 26th, but forever on Internet Radio.

Email ThisBlogThis!Share to TwitterShare to FacebookShare to Pinterest
Labels: radio