Turning on the Insurgents 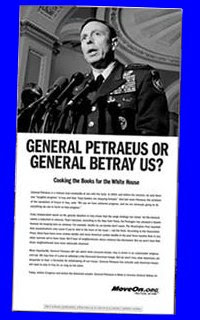 Over in Iraq, in troubled Ambar Province, a major turning point in the war occurred when the local citizenry turned on the al-Qaeda insurgents. Al-Qaeda simply went too far. They crossed a line and the Iraqi's could no longer tolerate their behavior.

I believe we Democrats have just about reached that point with the outrageous behavior of MoveOn.org. It is one thing to disagree with both the Invasion and the Occupation of Iraq. It is one thing the disagree with the policies and the actions of President Bush and Dick Cheney and Donald Rumsfeld and Condeleeza Rice. It is not wrong to look for a new path and for new leaders.

It's quite another to level stupid, childish, overly cute yet underhanded and slanderous attacks on General Petraeus and all those who are fighting at great personal risk to solve the terrible crisis in Iraq. Today's ad in the New York Times by the pond scum of MoveOn is beyond the pale. This ad makes me physically ill.

"General Petraeus or General Betray Us?" reads the full-page ad, which cost the liberal group MoveOn.org approximately $65,000 and ran in section A of today's New York Times.

The ad accuses the general of "Cooking the Books for the White House" and asserts "General Petraeus is a military man constantly at war with the facts," citing optimistic statements the general has made about Iraq in the past.

White House spokesman Tony Snow called it "a boorish, childish, unworthy attack" and called on members of Congress to condemn the ad."

Combined with other "over the top" paid media attacks on real leaders like Washington Representative Richard Baird, I feel it's time for move-on to "move on."

Even Democrat leaders in Congress see this ad as "counterproductive." ABC NEWS reported, "A Democratic leadership aide on Capitol Hill told ABC News that the ad was "not helpful" because it allowed Republicans to refocus attention from "what's happening on the ground in Iraq and the fact that everyone, even Gen. Petraeus, agrees that political progress is lacking."

I'm forced to completely agree with the outrage on the Republican side of the aisle.

Arizona Sen. John McCain calling the ad a "McCarthyite attack on an American patriot. … No matter where you stand on the war, we should all agree on the character and decency of this exceptional American."

Former Massachusetts Gov. Mitt Romney, wrote on the National Review blog "The Corner," that "(l)ike the men he commands, (Petraeus) is risking his life to protect our freedoms here at home. We should not prejudge him or his testimony, or give him anything less than the full respect he deserves.

Outside a South Carolina barbecue joint Monday afternoon, former Sen. Fred Thompson, R-Tenn., called the ad "outrageous" and said, "MoveOn.org has today, in effect, said that the General leading our brave troops in Iraq is betraying his country. This is the group that funds the Democratic Party. all upon the Democratic Party and all of the Democratic candidates for President to repudiate the libel of this patriotic American."

Democrats in Congress were forced into a corner by this lame brained move. Instead of being on the offensive and proposing meaningful alternatives to the President's surge, they were instead peppered by the press over the Move-On ad.

And, in failing to condemn the ad, they gave the story even more life. The ad became a lose-lose situation for spokespersons like Harry Reid.

I believe Move-On has really gone too far. They have outlived their usefulness. I certainly cannot and will not support their boorish tactics.
Posted by Bob Keller at 9/10/2007 06:39:00 PM

Not Your Mama said...

Well, we're in agreement over this one. The most depressing thing about it to me is that it's a good indication we may defeat ourselves at the election one more time, too many people associate MoveOn with the democratic party in general and it hurts us badly.

They and their followers are our version of the "religious right" and I'm just as sick to death of them.

"No matter where you stand on the war, we should all agree on the character and decency of this exceptional American."

We trusted (General) Colin Powell. . . and look how he betrayed us.

"(Petraeus) is risking his life to protect our freedoms here at home."

Oh? He's serving in Afghanistan? I missed that somehow . . . I thought he was in the Green Zone all this time.

On word play, I don't notice any consternation on your part about Rush Limbaugh's frequent use of the "Osama Obama".

I'm sorry vigilante... I'm NEVER going to buy into the "Rush Limbaugh did it so it's ok for us to do it, too" argument. That's childish and school-yard silly.

And when in god's name did Rush Limbaugh become your moral compass?

Nope. Our standards should be higher... much higher.

General Petraeus has a target on his back where ever he goes... and, sadly (very, very sadly) Iraq is a much more dangerous place than Afghanistan. Of course if we were to genuinely dedicate the numbers of troops necessary in Afghanistan, casualities would be higher there.

We should argue the facts, the strategy, the goals and objectives on Iraq... not drop to the disgusting level of "swiftboating" the commander of our troops.

You'll note John Kerry condemned the personal "name calling" attack on Petreaus and I'm surprised that you, usually a dealer in facts and strategies and history, haven't done so too.

I'm drawing your attention that the noble and patriotic sacrifice of our enlisted and commissioned troops in Iraq are not protecting our freedoms at home as you have your idiot Mitt Romney braying. Far from it.

Thirdly, just as I have zero respect for Bush, I harbor a healthy skepticism for those uniforms he has been hiding behind increasingly as his cluster-fucking disaster swirls further southward.

You gotta problem with that?

Romney's the same idiot who argued that his children's service in his presidential campaign was on the same level of patriotic service as our troops' serving in Iraq. I'm totally stunned that you would quote this stump with approval. Sometimes you just blow me outta the water, Wiz!

Not Your Mama said...

Vigilante: my thing with it is that unlike Colin Powell who was in a position to affect/determine policy, Petraeus is not, no matter how either party or the media tries to spin it.

Of course the Bushites are more than happy to spin it that way too so that any military successes he reports on they can then spin into his "endorsement" of continued troop presence thus hiding behind his "recommendation" should things go badly.

Petraeus isn't endorsing or recommending anything, he's simply stating that if you want the military to accomplish A then you'll have to give us B. It doesn't have one iota of meaning beyond that.

Good points scored, N.Y. Mama. But, having gotten this far along in your defense of Petraeus, should also comment on Admiral Fallon's description of the General two full years ago.