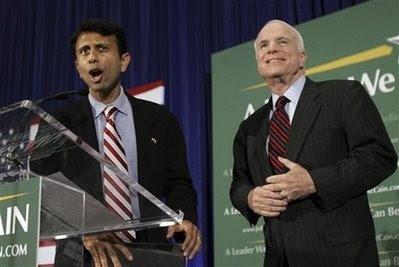 The Wizard sits in front of the television once again on a Tuesday Night and opines on the day's primary results........
If you were smart or lucky enough to switch over from MSNBC to FOX NEWS, you might have caught Bobby Jindal's stunningly brilliant introductory speech for John McCain. You would have also caught McCain's entire speech start to finish instead of hearing Keith Olbermann slobber shamelessly over the Barack Obama nomination. Thanks to TiVo I got to do both. Only FOX carries McCain's entire speech.
MSNBC is rapidly becoming an insult to journalism, their viewers and to everyone's intelligence. If FOX leans to the right (and it does), MSNBC leans so far left they literally capsize the boat every night. Don't get me wrong. I watch MSNBC all the time. I just recognize how pathetic they have become.
FOX and MSNBC. What a sorry state news television is in. What happened to integrity and intellectual honesty?
But back to Bobby Jindal. Bobby Jindal gave an excellent speech. He was bright, articulate, knowledgeable and he is a gifted speaker. Jindal is the future of the Republican party. Nominating him puts him in position to carry the party's banner in 2012 or 2016.
Regular readers might assume I will endorse Barack Obama in the general election. Certainly I've written much more about Obama than I have McCain. But hold your horses. I endorsed BOTH for their primary nominations. I will discuss my views of their strengths and weaknesses and, much more importantly, their positions in the issues over the next few months. I genuinely have not made up my mind. I promise I will endorse one by October and I will have thoroughly aired my reasons.
BUT...... but.... but, I'm going out on a limb tonight. I confidently predict Barack Obama will be elected the next President of the United States.
Anyone who did watch FOX NEWS tonight and listened carefully to EVERY WORD of McCain's speech and EVERY WORD of Obama Speech knows the results right now.
That doesn't mean I think Obama should win. I have many, many problems with his candidacy. But I think he will win.

I think you're right, wizard. Now, I'm getting amped up about the VP nomination. Just 99 days until the Democratic convention. Who will Obama choose?

I will go out on your limb, Wizard, and predict an Obama victory. But I won't try your branch that Bobby Jindal will be McCain's Vice Presidential choice. However, I would say that Jindal has the inside track on being a GOP Convention key-noter this year!

I am curious too!

An interesting post that exposes much more interesting opinions on your part, Wizard. I obviously made an ass of myself by assuming you would be supporting Obama. Very interesting stuff. I do value your open-mindedness and your interest in true fairness--you see the value in both parties and the flaws in both parties, and you are attempting to be as fair and informed as possible. I admire that, even if I personally feel like John McCain squandered all the cross-party goodwill I once held for him by becoming a ranting, raving, right-wing line-toeing spin-meister.

I do think that your indecision is becoming common as we exit the primary season and enter the General Election. I think it becoming increasingly common among a lot of Hillary voters, who are in real turmoil now as they have to choose between the candidate who shares Hillary's party and the candidate who they think might more closely share her "values." I will say that as a Hillary voter, I am facing no such turmoil, and am supporting Obama 110%. But I do think that turmoil is real among many of her supporters, and as such I feel like this race is going to be a lot closer than a lot of people think. I will agree with your prediction of an Obama victory in November, but I will not be surprised (though I would be very deflated) if it doesn't happen.

As for Jindal, I agree with Vig: not the VP candidate this year, but he would be a great choice for the GOP key-note speech. Maybe he's on an Obama-like track: key-note speech this year, then 2012 GOP nominee trying to dethrone Obama.