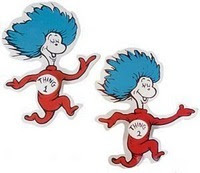 It's just damned frustrating to realize that America could easily be oil and energy independent today. We could easily be free of the influence and control of the Saudis, Iran, and Sean Penn's close personal friend Hugo Chavez.

The only THINGS that have prevented energy independence are Thing One and Thing Two, aka the Republican and Democrat Parties.

Thing One and Thing Two have long preferred demagoguery to actually serving the American Public. I hope you all have followed the antics of Thing One and Thing Two over the last eight years. Never Compromise. Always stake out opposite sides of all Energy issues. Never Compromise. Never actually pass any legislation. Blame the other Thing for the stalemate.

Steps needed for lower energy prices and energy independence have already been thoroughly outlined. Expand drilling in the United States, including off shore and in what is perhaps the single most environmentally safe area in the nation, the Arctic refuge (ANWR).

Clear the road for increased Nuclear Power. It's simply stunning that Iran is smarter than the United States. Hell, let's let Iranian President Mahmoud Ahmadinejad run the US Nuclear Energy Program. At least he actually believes in energy independence. O.K., that's a joke, but you get the idea.

End the incredibly stupid tariffs on Brazilian sugar based ethanol imports. Brazil, in case you hadn't noticed, is our friend.

In short, implement all the good energy policies from both Thing One and Thing Two.

John McCain, President Bush, most Republicans and many, many Democrats did prove they can read the POLLS today and suddenly switched sides to support off shore drilling. Good for them.

But can we actually get Thing One and Thing Two to compromise and pass legislation?

Well, remember The Cat in the Hat by Dr. Seuss? Thing One and Thing Two only created a mess. It took the children (i.e., the American Public) to actually clean up the mess.

A "tip o' the Wizard's pointy cap" to Senator Harry Reid, who first used Dr. Seuss' Cat in the Hat to illustrate the log jam in the US Congress (courtesy of Wikipedia).

Check out these US Carbon Footprint stats, an interactive United States Carbon Footprint table, illustrating Greenest States to Cities. This site has all sorts of stats on individual State & City energy consumptions, demographics and much more down to your local US City level...