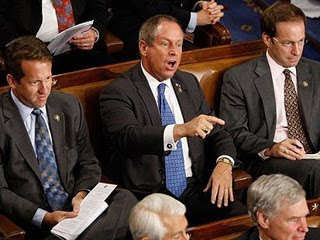 I thought President Obama gave a bitterly partisan speech last night on "Health Care System Restructuring," using the very hyperbole and scare tactics he had been accusing the Republicans of using.

I can't call it "Health Care Reform" because the word reform implies fixing a problem or improving a system and the Obama Plan, as it can finally be called, will do neither. At this point I'm simply saddened that a bill will eventually pass based on counterproductive ideas and mythology.

I was on Twitter as the President spoke. To paraphrase Obi Won Kenobi in Star Wars, it was as if millions of voices cried out all at once. Twitter exploded in shock, horror and anger. Tweets from the 400 or so folks I follow erupted so quickly, my service could not keep up. At that was just a microcosm of what happened nationwide.

Never mind that President Bush was treated much worse by Democrats when he tried to get Medicare and Social Security Reform in a Joint Session of Congress. Bush was wildly unpopular. Nobody cared, although they should have.

No, Congressman Joe Wilson galvanized a nation. Hell, his opponent, Robert Miller, enjoyed a windfall of over $400,000.00 in donations in minutes after Wilson shot off his mouth. Wilson cannot possibly win re-election.

But the real beneficiary was President Obama and his Health Care Restructuring that is about to be inflicted upon our weary nation. Totally unnecessary, hugely expensive and structurally damaging, our new system will prove to be outrageously expensive and will rather quickly dismantle the greatest Health Care System on earth. Got to give Joe Wilson credit. The man is a political powerhouse. President Obama couldn't have done it without him.
Posted by Bob Keller at 9/10/2009 05:27:00 PM

This is the only 'conservative' blog I stop by to give a read. Though we are opposite politic / values contra indicated folk, you and I, I still understand the value in opposition parties within our democracy. (And I won't insult with further opinions of the present conservative leadership) I'm just going to take issue with your point, which I think is, that without the outburst from Wilson, President Obama would have not made an effective speech imploring support and after all, STILL, bipartisanship.

Joe certainly didn't do himself or his cause any favors, but I think the damage done will be relatively fleeting. There are months to go before a health care bill can reach the light of day, and a chasm to cross even amongst Democrats in the House and Senate.

These anti-illegal immigration people are a bit luny. I stand with them (it is illegal, after all), but this doesn't need to be interjected into everything. Makes them sound a bit like conspiracy nuts.

Gwendolyn - "Balderdash!" is an excellent comment. And you may well be right. Alas, we can't ever know for sure. All I know is Keith Olbemann and Rachel Maddow(whom I watched that night) spent much more time on the "You Lie" comment than on the content of the speech.

As for the "Twitterverse," virtually 100 % of the discussion was on Congressman Joe Wilson, even from such liberal luminaries as @markos (Daily Kos).

Regardless, the TOTALITY of the night gave a big boost to President Obama.

I can't begin to tell you how much I appreciate your stopping by to comment. Thanks and come back often.

Mr. Wilson's outburst may have been unfortunate, but its context is also being discussed. Mr. Wilson was reacting to the President's claim that illegal aliens would not be covered under his plan. Mr. Wilson has, in subsequent interviews, pointed out that he has read the 1000-page bill, and is aware that while the bill disallows coverage for illegals, it also lacks any enforcement provisions to determine if potential users are, in fact, illegals. He is also pointing out that amendments to provide enforcement have been disallowed by Democrat leaders. Perhaps some good may come of his incivility.

That being said, the President called opponents of his plan liars. Pot, meet kettle.

Looks like Rep. Wilson got something bi-partisan into the bill. The WH adopted his stance...

"Wilson and his Democratic opponent Rob Miller have each reportedly raised more than $1 million in campaign contributions since the episode Wednesday night."

Methinks you posted early on this.