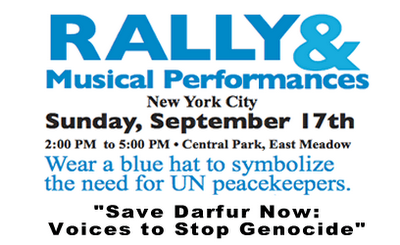 Regardless of where you live, you can make a statement this Sunday, September 17, 2006 about the genocide in Darfur. All you need to do is wear a blue hat.

Wear one to church. People will ask you why you're wearing blue. Let's face it, nobody wears hats anymore. Don't have a hat? A blue scarf will do.

You're going to get a few stares. Probably a few laughs. But people will notice and many will ask. And you can tell them about the genocide in Darfur. You can explain the blue hat or scarf symbolizes the need for U.N Peacekeepers in Darfur to stop the genocide. You can ask for help.

Thousands of people are still losing their lives...

Despite the signing of a Darfur peace agreement on May 5, 2006, the violence in western Sudan has not stopped; in fact, in some parts of Darfur, the violence has grown worse.

People are still being killed and raped and displaced - every single day.

Finally, on August 31st the United Nations Security Council approved deployment of the robust peace keeping force of 21,000 by a vote of 12 to 0. But the vote was a hollow victory because it depended upon "permission" from Sudan.

The United Nations must take action with or without Sudan's permission.

On September 17 people around the world will take part in the Global Day for Darfur to show world-wide support for the Darfuri people and to put pressure on our Governments to protect the civilians.

Actor George Clooney and Nobel Peace Prize winner Nobel laureate Elie Wiesel appeared before the United Nations Security Council on Thursday to make an impassioned plea for immediate UN intervention in Sudan's Darfur region. On Friday, Mr. Clooney and Mr. Wiesel appeared on The Today Show where they discussed the situation in Darfur and the "Save Darfur Now: Voices to Stop Genocide" rally in New York City this Sunday. And there are rallies in other cities listed below.

But don't let the absence of an event in your area stop you from making your own personal statement. Wear a blue hat or blue head scarf on Sunday, September 17th.

THE ONLY HOPE FOR DARFUR: WE-THE-WORLD’S-PEOPLE. Duh.


It is said that the mark of truly being “crazy” is expecting different results from doing the same thing over and over and…. Ok, we needed to try some new approaches, hoping we could find a new formula for mass social change (stopping Genocide has NEVER been done); looking for an approach that would be comfortable, convenient, safe, executed from our computer terminal / phone / TV or office in some combination. The variations we’ve tried are: * Blame (Bush, UN, EU…) , * Emails, letters, postcards…,* Letting the Nonprofits do it, * Divestment. And the results are in. WE ARE NOT, STOPPING THE GENOCIDE!

You mean that the answer for Darfur is the same answer we found for…* Ending the Vietnam War, * Gaining Civil Rights in the US, * Gaining Women the right to Vote in the US, * Ending apartheid in South Africa, * Throwing off the British oppression at our start....?

Yup. No one else, nothing else can stop it, can save 4,000,000 in Concentration Camps in Sudan and Chad. The buck stops with WE-THE-WORLD’S-PEOPLE. Let’s stop talking and start - marching, demonstrating, sitting-in, hunger striking….

The next step is September 17th (SaveDarfur.org; DayForDarfur.org). BUT, then we need to be ready on SEPTEMBER 18th, 19th… AS LONG AS IT TAKES, WHATEVER IT TAKES.

Other than prayer, are you appealing to America's moral leadership or her military might in your generously motivated effort to prevent further genocide in Darfur?

Both have been severely compromised in Iraq and Lebanon.

"...are you appealing to America's moral leadership or her military might..."

Both. And, diminished as they might be, President Bush has promised and used both in the US efforts in approaching the Darfur genocide.

The president, with the prodding of Colin Powell (a real leader in this matter), has declared Darfur to be a genocide. No sitting president has ever used the "G" word before.

Bush has promised military and logistical and financial support for the Darfur peacekeeping force (if it is ever deployed).

I've been in regular contact with several members of Congress (both Senators and Congresspersons) and have corresponded with President Bush.

The United States is taking this seriously.

If you're implying the US would have more moral and international clout if we hadn't invaded Iraq, you are quite correct.

Omigod, Wizard. Do you realize what you just said? And you're trying to reassure me?