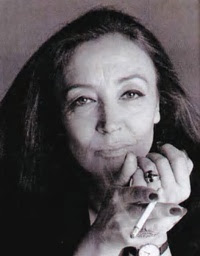 In response to the London terrorist bombings Oriana Fallaci wrote to Pope Benedict in July, 2005:

"Now, I ask myself: What do you say, what do you have to say, about what happened in London?

They ask me face-to-face, via fax and email; often scolding me because up until now I have remained silent. Almost as if my silence were a betrayal. And each time I shake my head and murmur to myself: what else should I say?!?

I've been saying it for four years--that I fight against the Monster that has decided to eliminate us physically and, along with our bodies, to destroy our principles and values. Our civilization."

Oriana Fallaci in an essay to Pope Benedict following the London bombings. This essay was also published by the author. Written on or about July, 20, 2005. FULL TEXT: CLICK HERE

Oriana Fallaci was never politically correct. She was genuinely "fearless." Oriana could teach a lot to Arianna Huffington about being fearless. She was a feminist long before the term was casually applied to nearly everyone.

Readers of this journal will remember my post from last June 12th, "Really Speaking Truth to Power" about Oriana Fallaci's battle over free speech in Italy.

"Oriana Fallaci faces a trial and jail time for a book, "The Strength of Reason," that she wrote over a year ago about the challenges facing Europe as more and more Muslims move into Italy and western Europe. Several of her comments were interpreted by Muslim leaders as insulting to Islam. And insulting Islam is illegal in Italy."

As a writer and journalist in the 40's, 50's and 60's Oriana did a man's job in a field dominated entirely by men. And she was better, tougher and more aggressive than any of her male counterparts.

Katie Couric doesn't realize it, but she owes her job today to Oriana Fallaci. Oriana was the pioneer.

Fallaci set the pace for a daring life when she joined Italy's anti-fascist resistance as a teenager during World War Two, then showed the same fearlessness as a war correspondent.

Liberals should have been celebrating her life and work. But in Oriana committed an ultimate liberal sin. She dared to criticize a religion. She was critical of Islam.

And she did a hell of a lot more than criticize. She was a journalist. She did her research. She did her homework.

And she became one of the first and, by far, the most vocal critic of what she called "Islamic Nazism."

The hero of the left who so aggressively attacked Nixon's Secretary of State Henry Kissinger to the cheers of the left, is now "persona non grata."

In her interview with Kissinger, Fallaci needled the U.S. statesman until he agreed that the Vietnam War was "useless."

Kissinger wrote that his 1972 interview with her was "the single most disastrous conversation I have ever had with any member of the press."

Sadly today's left values such heroics only until you cross their sacred liberal Maginot Line. Like Joe Lieberman, she failed to oppose "George Bush's war."

I looked for a memorium to Oriana on The Huffington Post. There wasn't even a mention of her passing. The Daily Kos? Don't be silly. After all she opposed al Quada, not George Bush.

If you want to find a tribute to Oriana you have to go to Michelle Malkin ( more on Michelle and her often liberal bent will follow in an later post).

We've lost a great hero. We've lost someone who really knew how To Tell Truth to Power.