It's Not Morning In America, Part 2 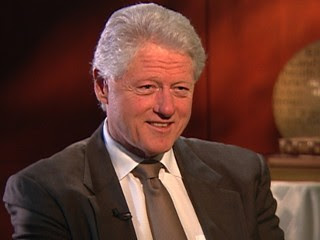 I believe our President is doing everything he can to help the economy and the country. He seems to be working at breakneck speed and with great organization and effort. But his efforts seem to lack optimism or, in the iconic single word symbol of his campaign, "Hope."

Bill Clinton makes exactly the same observation in his
interview on ABC NEWS:


I made the point earlier that a huge part of President Reagan's success in pulling America out of the economic mess at the end of the Carter era was Reagan's electric optimism. We all believed it was "Morning in America."

This doesn't mean you sugar coat the facts. But Obama is now slipping in the polls (down 9 percentage points in one month) and support for his stimulus package has now fallen below 50%. Now there are some very serious problems with the stimulus plan, as I've discussed in several recent posts and will discuss further in the future.

But President Obama can start to improve both his ratings and his efforts by following the advice offered by Clinton, one of the finest communicators in recent times.
Posted by Bob Keller at 2/20/2009 05:05:00 AM

It is really easy to extrapolate reasons behind the negativity we are seeing. Myself I feel he has further spending plans that require the public buy-in. Fear can be a strong motivator.

How many times, lately, have we seen "Someone has to do something!" Which does not reflect any planning, rather it's panic.

Now Wizard where in Clinton's brief interview did he say Obama was "terribly negative?" Secondly, I firmly believe he needs to tell America the truth, good or bad. Finally, to say that Barack Obama doesn't inspire hope is akin to saying that the sun isn't hot. The election of this president has inspired an America once filled with a sad and lonely despair with great joy, optimism, and of course hope. Fear and lying were tools of the previous administration. They have been discarded by this administration.

There is less hope every day. Do you not understand the significants of the spending bill?

In 2009, the federal deficit will be larger as a share of the economy than at any time since World War II. Stocks have lost more than fifth of their value since President Obama was elected. the Tax Policy Center notes, the price of purchasing insurance against default on 5-year senior U.S. Treasury debt rose from around 10 basis points before September 2008 to above 70 basis points in early 2009. Source: http://www.taxpolicycenter.org/publications/url.cfm?ID=411843

The deficit is projected to average at least $1 trillion per year for the 10 years after 2009, even if the economy returns to full employment and the stimulus package is allowed to expire in two years. The longer-run picture is even bleaker. A fiscal gap r between $1 trillion and $1.3 trillion per year in current dollars. And to close that gap we would have to cut all government spending by 23 percent or hike taxes by 52 percent.

Lee, What an excellent analysis.

I am deeply disturbed that Mike, and many, many, many more cannot see or analyze these facts. I'm writing a short blog entry about supporting the President and supporting the country (sometimes called patriotism). Support should never be blind or unilateral. Sometimes criticism is the very best way to offer support.

Those who criticized the Viet Nam War were patriots, not traitors.

For a large and complex variety of reasons, Barack Obama and our elected representatives have made a tragic and extremely dangerous mistake. Part of the cause (but by no means all of it) is Obama's inexperience. Part of the problem is partisanship and payback. Mike has said (somewhere) that he supports and believes in President Obama. So do I. But he has made a tragic mistake. Tens of milions of American investors are trying ton tell him the stimulus, the housing bailout and the (virtually incomprehensible) banking bailout are doing more harm than good.

This isn't a "Republican" issue. People don't lose billions of dollars in the stock market just to make some conservative partisan point. People don't transfer their life's savings into gold (over $1,007.00 an ounce, an all time high today) and other hard currencies to make a partisan point.

President Obama wants to do what is very best for America. I believe this will all my heart and mind. But he has really screwed the pooch on this one.

I wrote on your thread about Britney's song.
K

Geithner needs to go. That one step alone would help a lot, I think. As for the stimulus bill, I guess that the only thing we can do at this point is cross our fingers. Unfortunately.