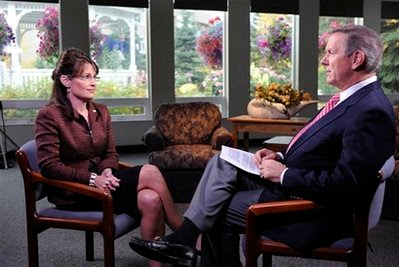 I was up well before dawn this morning preparing for a road trip. I needed to refuel the car and I am worried about potential 30% increases in gas prices that could affect all of us motorists in the wake of Hurricane Ike.

Since I was up and traveling outside my normal morning routine, I was listening to Doug Stephan's Good Day on the radio instead of my normal diet of television cable network news programs. Change is good, It gives you more perspective on current events.

If you've never listened to Steffan's program he tries, but usually fails, to avoid politics and political issues. But his crew made a comment on ABC's Charles Gibson's interview with Governor Sarah Palin that was amazingly spot on: "What was with Charles Gibson last night? He looked like a curmudgeonly old school principal who caught a girl chewing gum in class."

I laughed until I cried. Stephan and his crew were so right.

As great as the pressure was on Sarah Palin, it was even tougher on Charles Gibson who has endured three days of particularly critical comment simply because he was awarded the first interview with Governor Palin. Gibson was as much under the microscope as Palin. And the pressure showed.

I wish the Charles Gibson I know and deeply respect had interviewed Palin. I'm certain the McCain camp wishes the real Gibson had shown up, too. Everyone would have looked a lot better.

Palin faltered a couple of times under Gibson's grilling. But Gibson acted like he was conducting an inquisition. It was difficult to watch. The normally relaxed and chatty Gibson would have gotten a lot more from Palin. This certainly wasn't the Gibson that recently interviewed Barack Obama and that will come back to haunt Gibson.

Sarah Palin's interview also showed the signs of the intense pressure she is under. Plus I get the feeling she is being terribly over managed. The McCain Palin team has got to relax. If she is over coached, she will not do well in the upcoming debate. Frankly, more live, unscripted interviews will prepare her better for the debate than any amount of coaching.

Over the next 72 hours there will be thousands of blog posts, interviews and television and radio commentaries about the Palin-Gibson interview. Some will claim she demonstrated she is totally unqualified for office. Others will claim, with video clips to back them up, that she was poised and rock solid. I sincerely doubt any minds were changed. Of course we have one more segment to watch tonight. That could be the atomic bomb.

I remain both impressed by and confident of Palin as a candidate. But it's early and I'm more than ready to change my mind (on all four candidates) as the cycle continues. We will see some really major mistakes from someone before we vote in November.

I'm hoping for a deeper and better interview with Palin before the election. Based on last week's compelling Obama interview, I'm hoping the McCain team will grant a Palin interview with Bill O'Reilly. That would be "must see TV."

Did you read how ABC cut up the tape to remove the parts where Palin looked the best?

Not that this will come as a surprise to anyone, but Gibson and ABC News seems to have done a lot of editing of the Palin interview, and most of it seems to be to make Palin look less knowledgable than she actually is... and more stridently right wing ultra fundamentalist Christian.

Even UPI seems to think this is backfiring on Gibson and ABC.

Come on out and say it, Wizard. Tell your faithful readers where you stand. Today, right now, are you a 'fan' of Sara Palin? Would you like her to be the next vice president of the U.S.A.? Don't give me a sportscaster's handicapper's prediction as to whether or not she will win. Rather tell us should she win? Right now, what is your preference? You can always change your mind later. But right now, up or down, yes or no, what do you say?

Sorry vigilante, I'm not at all ready to make an endosrment today. I will do so sometime after the third debate.

But, as of today, I DO NOT HAVE ANY PROBLEM WHAT-SO-EVER with either McCain-Palin or Obama-Biden.

But, my position on the issues and the principles for which I stand WILL NOT CHANGE.

I will not blame Obama nor will I withhold my vote for Obama because of the complete ABSOLUTE FAILURE of many Democrats, and Progressives to stand up for women's rights and to take a strong stand against the treatment of Palin.

But, trust me on this one, the Democrat Party has lost virtually all it's credibility on this issue. Women are not likely to trust the Dems again any time soon. Nor will I.

The latest Progressive (liberal???) to fall prey to Palin Derangment Syndrome is your hero Frank Rich writing in today's Times. The man is both wrong and an idiot.

Everyday I think it can't get worse. Everyday I'm wrong.

Only one major spokesperson is behaving responsibly and with honor and this is Hillary Clinton.

Wizard, I am confounded. Truly.

Wizard, I've always enjoyed our conversations, but I need to state that Palin is a danger to women's freedom of choice. For corn's sake, she shoots innocent wolves from helicopters. I abhor her cruelty and sexism.

I'm sure you'll see an O'Reilly-Palin interview on Faux News which will be pro-Palin bias. As for me, I'm waiting anxiously for the Biden-Killa from Wassilla debate.

Most news is biased, but I'll be watching the debate, as I did the DNC and RNC, on CSPAN. They know how to broadcast what's real—warts and all.

BTW, Palin's looks are not important: it's the issues. She already is a stridently right-wing ultra fundamental. I don't think ABC had much work to do on that score.