The Will Be No Obamanation Here 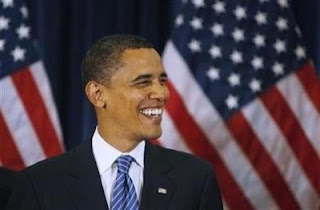 I want to make a very, very short entry tonight that I will expand on greatly in the next few weeks.

My point is extremely simple: All four candidates for President and Vice President are extremely well qualified for the offices which they seek.

America will be extremely well served no matter which ticket wins.


To paraphrase Don Imus, there is no doubt that, if elected, John McCain might well be the finest, most honest and most honorable Presidents in recent history.

But in Barack Obama we have one of the brightest and most thoughtful persons to ever seek the highest office in the land. More importantly he is pragmatic and is genuinely willing to consider all solutions to every problem. He will not be bound by partisan dogma. And, as a bonus, he is charismatic and a truly great leader. 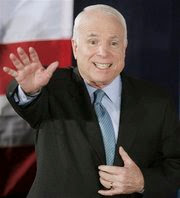 There will be no slander on this website from this author (however the comments section will be unmoderated (except for spam) and all comments are welcome). I have NEVER and will NEVER refer to Senator McCain in an derogatory language. We will not call him "McShame" or "McBush" or any other cute or clever phrase.

Nor will we ever refer to Senator Obama as the "Obamassiah" or an "Obamanation." This type of slander might be the stock and trade of Rush Limbaugh, but it does not belong in an intelligent discussion of candidates or the issues.

I'm going to take this one step further. I know that will break your hearts, but the is NOT the most important election of our lifetimes. The fact is we as Americans CANNOT LOSE. Both candidates are that good.

So how do we chose? It you don't fall prey to the partisan slander and bickering, it's going to be easy. Easy because these are two very different candidates with striking differences in their approach to our greatest problems.

Over the next eight weeks I intend to explore those differences on the most important issues: [1]Iraq and Afghanistan, [2] Health Care, [3] Education, [4] Environment, [5] the Economy, Taxes and Spending, [6] Civil/Women's/Gay Rights and finally, [7] Style of Governing.

That Governor Palin was once a beauty contest contestant IS NOT THE ISSUE. The fact that Joe Biden makes silly misstatements (asking a wheelchair bound man to stand earlier today) IS NOT THE ISSUE.

Its a pleasure to read this and though a conservative agree with you on almost everything. Without my saying what you've so elequently written I began posting earlier today using very similar guidelines.

Thanks for being principled and strong-minded enough to assert yourself in this manner.

You are making my inclination to assume that liberals have mush for brains look pretty stupid. You thoughts are crystal clear & very well said. Kudos.

wc, Sadly I AM beinging to think liberals have mush for brains.

I've never in my life seen a party or political movement so determined to fail and self implode. Karl Rove can sit on the sidelines this year and watch the Democrats play the worst dirty tricks.... on themselves.

When you have time, perhaps you could comment on something. I'm almost 50, and I remember a time when most people understood what "checks and balances" mean -- but not lately. How can you discuss RoeV without understanding how our govt was designed? Am I just crotchety, or have we lost a LOT? Cheers-

I could't agree with you more on what "is not the issue."

I hope the election comes down to individual assessments of policy, experience and character. I look forward to your discussions of the candidates policy differences. But on "character" you score high in my book.

All four candidates for President and Vice President are extremely well qualified for the offices which they seek.

America will be extremely well served no matter which ticket wins.

I don't think so. Any one who has been an unapologetic cheerleader and supporter for the worst foreign policy decision in American history would not be qualified for the White House. Electing him would be like crossing the bridge to no where for another four years. But, I sense that's okay with you, Wizard.

Vigilante, I keep feeling that the biggest differences between us is that you continously look backwards in time.

Your assessment of the invasion of Iraq is completely correct. It was stupid, unnecessary and counterproductive. But it happened. We cannot unring the bell.

And hence we part company. We cannot and should not punish George Bush by simply screwing up much worse than he ever did. Hence, from day one I have supported the Surge in Iraq.

Bush broke Iraq, it was our job to do two things. First, fix it as best we can and leave it with enough stability to chart it's own course. Second, protect our own country. Turning Iraq over to either Iran or al-Qaeda was never an option for me.

Now the key here is that John McCain was right in 2006 when that key decision had to be made (and, yes, that means Bush was right, too). Obama was wrong. Very, very wrong.

But I still don't disqualify Obama from the Presidency because I have great faith in him to solve problems correctly and with great diplomacy.

There are always ways to cure any problems we might have with Bush. Biden promises prosecutions. I'm not sure that is a smart or correct move, but the path is wide open if Obama is elected.

Look Forward. Decisions made today must always be for what is best for the future.

Yeah, I can easily see why you Weimar Republicans want to have an election campaign that doesn't mention the past decade. That's so understandable. Fuck up the country. Fuck up the world. Then forgetaboutit. Turn over a new leaf. Turn the page. Look to the future. Oh, but keep the people on who FUBARed everything. Because they are offering 'change you can trust'. Jeeez, Wizard, after all our conversations, I'm beginning to think your credulity exceeds your integrity.