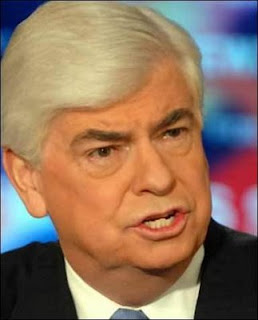 I watched Senator Chris Dodd (D-CT) on the news shows on Sunday. Long gone are the days of Tim Russert when reporters actually did their homework and did actual research. Tough questions were off the table. However, ample opportunity was given to Senator Dodd to blame everyone but himself for the current crisis.

Sadly, the bulk of the blame actually belongs at Senator Dodd's doorstep.

WASHINGTON, Sept. 10 — A report by outside investigators in July concluded that Freddie Mac manipulated its accounting to mislead investors, and critics have said Fannie Mae does not adequately hedge against rising interest rates. ...

"The current regulator does not have the tools, or the mandate, to adequately regulate these enterprises,'' Mr. Oxley said at the hearing. ''We have seen in recent months that mismanagement and questionable accounting practices went largely unnoticed by the Office of Federal Housing Enterprise Oversight,'' the independent agency that now regulates the companies.

"These irregularities, which have been going on for several years, should have been detected earlier by the regulator ..."

A bill was placed before Congress that would have implemented the most significant regulatory overhaul in the housing finance industry since the savings and loan crisis a decade earlier.

Guess who sounded that strong warnings about the impending crisis at Freddie Mac and Fannie Mae?
Guess who proposed the bill to increase strong REGULATION of the Housing Industry?
President George Bush and the Bush Administration!
And guess who fought it all the way?

The Bill was opposed and eventually blocked by none other than Senator Chris Dodd!
Dodd was completely in the pocket of Freddie Mac and Fannie Mae and Countrywide Finanace Co. Dodd was (and still is) the largest recipient of campaign contributions from the now failed housing lenders. We're talking hundreds of thousand dollars.

''There is a general recognition that the supervisory system for housing-related government-sponsored enterprises neither has the tools, nor the stature, to deal effectively with the current size, complexity and importance of these enterprises,'' Treasury Secretary John W. Snow told the House Financial Services Committee in an appearance with Housing Secretary Mel Martinez, who also backed the plan.
After the hearing, Representative Michael G. Oxley (R), chairman of the Financial Services Committee, and Senator Richard Shelby (R), chairman of the Senate Banking Committee, announced their intention to draft legislation based on the administration's proposal. Industry executives said Congress could complete action on legislation before leaving for recess in the fall.
Significant details must still be worked out before Congress can approve a bill. Among the groups denouncing the [Bush Administration} proposal today were the National Association of Home Builders and Congressional Democrats who fear that tighter regulation of the companies could sharply reduce their commitment to financing low-income and affordable housing. ...

"These two entities — Fannie Mae and Freddie Mac — are not facing any kind of financial crisis," said Representative Barney Frank of Massachusetts, the ranking Democrat on the Financial Services Committee. "The more people exaggerate these problems, the more pressure there is on these companies, the less we will see in terms of affordable housing."

President Bush's strong regulatory proposals died in the Senate with Senator Chris Dodd leading the effort to block any regulations or protection for the American Taxpayer.

I just love it when history gets completely rewritten.
********

A grateful tip o' the Wizard's Pointy Cap goes to Wiz-ziW for pointing me to this story and providing documentation.
Posted by Bob Keller at 9/22/2008 09:54:00 AM

Yes...and who is second after Dodd?

How many years have each been in the Senate? Um-huh...if you do the math, I believe Obama comes out on top.

Now, was Obama for regulation, against it, or did he merely vote present?